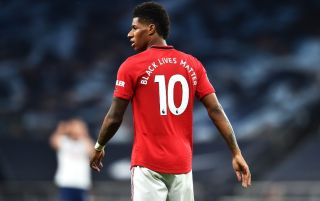 • Bid for a Liverpool shirt

• Bid for a Man United shirt

• Bid for an Arsenal shirt

• Bid for a Chelsea shirt

Every Premier League player has turned out with 'Black Lives Matter' on the back of their shirt in place of their name over the last week, in a show of solidarity with the international anti-racism movement.

With the message only being on shirts for the first 12 games of the restart – all clubs wore the shirts for the first round of fixtures, with Manchester City, Arsenal, Aston Villa and Sheffield United also sporting it for their game in hand – it means that as well as being a powerful message, the shirts bearing the slogan are also incredibly rare.

That scarcity is now being put to good use: an online raffle will make all the shirts available to fans for just £5, with money going to an anti-racism charity.

Shirts for Change, organised by #PlayersTogether – an initiative led by Premier League players initially set up to support frontline NHS workers, volunteers and patients during the coronavirus crisis – sees fans able to choose which Premier League club's shirt they'd like and purchase a ticket through eBay for just a fiver.

Each club has a number of shirts included in the raffle, and each will be signed by 11 players from that club. Tickets are now on sale and the raffle will close on Monday, June 29 at 11.59pm.

The money raised will go to the Stephen Lawrence Charitable Trust, to support young people in BAME communities and help eradicate racism within organisations and at grass root community levels.

This raffle follows the #PlayersTogether Shirts for Heroes fundraiser earlier in June, which was the biggest football shirt giveaway in history, and raised over £1 million for the NHS Charities Together.

Speaking on the launch of Shirts For Change, Watford's Troy Deeney said: "I am proud to launch the ‘Shirts for Change’ raffle with #PlayersTogether on eBay UK to raise vital funds for the Stephen Lawrence Charitable Foundation, a charity which stands for equal opportunity for all, despite race or background.

"Put simply, we do not stand for racism on the pitch, in society or anywhere else it rears its ugly head.

"I hope that this will be a great way for fans to help support a fantastic cause, give them a chance to own a special and symbolic shirt, and raise a huge amount of money in the process."