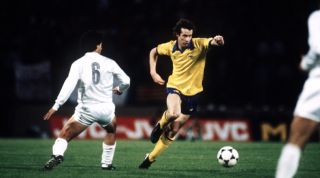 Quadruple-chasing Manchester City face a hectic end to the season. Should Pep Guardiola’s men reach the Champions League final, they will have played 13 matches in 43 days by the time the season ends. That’s a game every 3.3 days.

Not too tall an order in today’s game of huge squads, but what about back in the days of just one sub?

When Arsenal defeated Spurs on Easter Monday 1980, it began a sequence of games that would take in five FA Cup ties, six First Division matches and three European Cup Winners' Cup games – including four lots of extra time and a penalty shoot-out – and resulted in them winning absolutely nothing.

Juventus visited Highbury in a Cup Winners' Cup semi-final first leg 48 hours after that victory at Spurs, and three days after that 1-1 draw, Arsenal and Liverpool slugged out a goalless FA Cup semi. The replay staged four days later finished 1-1. Arsenal then travelled to Anfield to face Liverpool in the league for another 1-1 stalemate. Four days later the Gunners were in Italy for their semi-final second leg, where they shocked the Old Lady with a late 1-0 win.

But there was little time to celebrate: up next was a First Division match at home to West Brom 72 hours after leaving Turin, and their second FA Cup semi-final replay against Liverpool two days later.

Another draw meant the sides had to meet for a fifth time in 18 days, when, after another 72-hour break, Arsenal finally secured their place in the FA Cup final with a 1-0 victory.

Keeping up? Next it was on to Coventry 48 hours later where they recorded a 1-0 league win, before another two-day lay-off when Nottingham Forest visited Highbury for a 0-0 draw.

The Gunners enjoyed a full five days off before taking to the Wembley turf on one of the hottest days ever recorded for an FA Cup final... and then lost 1-0 to second-tier West Ham. Four days later they faced Valencia in the Cup Winners’ Cup final in Belgium. Another stalemate led to penalties and another agonising defeat.

After 12 matches in 30 days there were two league matches left to play. Two days after their Heysel shoot-out defeat they beat Wolves at Molineux, and two days later ended their season with a 5-0 battering at Middlesbrough, leaving them fourth in the First Division – which meant nothing then; not an appearance in Europe’s premier cup competition as it does now.

Fuelled on nothing more than steak and chips and the odd can of Long Life, the only squad rotation of the 16 players used was when 35-year old goalkeeper Pat Jennings’s huge hands were given a rest and Paul Barron took over for two games.

So while you’re marvelling at Pep’s supersized squad of finely tuned, expertly nourished athletes playing every three or four days, spare a thought for that Arsenal side back in 1980 who were pushed even harder – and ended up with nothing to show for it.