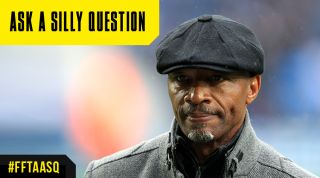 In late June 2014, I was in the passenger seat of a car making its way back from Glastonbury when my phone rang. I was hanging.

“Is that Andy?” said the chipper voice on the other end of the line.

“Yeah,” I croaked, convinced I was about to be quizzed about missold PPI.

“This is Cyrille Regis. I understand you want to ask me some silly questions.”

Desperately trying to hold it together, I made my apologies and said a colleague, Nick Moore, would do the 'Ask A Silly Question' interview later in the week.

“No problem, mate!” said Cyrille. “Look forward to chatting to Nick then.”

It was a mark of the man. As part of the 'Three Degrees' with Brendan Batson and Laurie Cunningham at West Brom, Regis blazed a trail for every black footballer since the 1970s, suffering horrendous racist abuse but never once reacting. He was a gentleman. No one in football has a bad word to say about him.

Nick Moore’s resulting interview displayed Regis’s brilliant sense of humour, revealing he would have been called ‘Gilbert’ – if only his cousin could have remembered what name he was to be called after a two-day boat journey to Cayenne, the capital French Guiana, to register his birth.

Rest in peace, Cyrille. Football wouldn’t be the same without you. You will be missed.

Hi Cyrille. How often does some wag shout “Nice one, Cyrille!” at you, and how difficult is it not to punch them?
Hi. That happens all the time. Someone will throw it in there. But you have to respect it – a bit of self-deprecation is always required. The daft thing is, my real name isn’t actually Cyrille – it’s Gilbert. After I was born in French Guiana, my dad sent my cousin over to Cayenne to register my name. By the time he got there after a two-day boat trip, he’d forgotten what they wanted to call me. So he went with Cyrille.

What a total bozo...
I forgive him. A two-day trip through the Amazon is pretty tough. My grandmother still called me Gilbert, but my mum didn’t want any confusion so they eventually went with what was on my birth certificate.

Why don’t we have more Cyrilles these days?
I don’t know, but I’m happy with it. There’s the odd goldfish or turtle called Cyrille, but not many people. Cyrille’s a good name for a turtle.

It is. Anyway, you’re a trained electrician. How confident would you be running a couple of sockets from the mains to the FFT shed?
Oof. I haven’t practised as an electrician since I was 19, so it’d be a stretch. I’d give it a go, but I’d have to do some extensive reading up first. Everything has changed 10 times since I did it. I’d probably do a two-out-of-10 job. Hopefully I wouldn’t kill myself or anyone else.

Ever badly electrocuted yourself?
I did. I was wiring up the Hotel Intercontinental once. I was doing a fitting with the electricity still live. I got a massive shock doing the wiring – the volts flood your body. It teaches you to respect electricity, believe me.

The big four. Would you like to see James Rodriguez forced to do an apprenticeship as a sparky?
It does give you an appreciation of what you do; a sense of contrast, a deeper gratitude for where you are. You’re in a bubble as a footballer. It might help.

The Regis clan were excellent footballers. Do you reckon you could beat any other family in Britain at five-a-side?
We’d give it a decent go. Me, my brother Dave, Otis Roberts, Jason Roberts, our cousin John, the sprinter – he was decent with a ball, too. We’d have had a combination of pace and power, but the goalkeeping situation would be desperate. We’d have to play a rush keeper. What family could beat us? Maybe the Allens – Mad Dog, Paul, Clive, Bradley. They’d be decent and have a lot of goals. But we’d outmuscle them.

If you could have anyone in the world as your uncle, who would it be?
Can I have the entire Brazil 1970 World Cup squad? Watching that lot was amazing as a 12-year-old – the first World Cup in colour, those kits... Imagine them coming round for Christmas: Uncle Pele, Uncle Jairzinho, Uncle Tostao, Uncle Rivelino. I’d just sit them down and listen to their stories.

Did you actually like the band the Three Degrees, or were you more of a Ronettes man?
It was reggae all the way for me. I was brought up on Lovers rock, Dennis Brown, Bob Marley, Augustus Pablo – all with 80-inch bass speakers the size of wardrobes.

There have actually been 15 different members of the Three Degrees. Is that ridiculous?
Nah, it’s good that they are still going. The Four Tops are still going too, although I’m not sure how many of them there have been. Loads, probably. Keep battling on!

Finally, your birthday is also World Hand-Washing Day. How rigorous is your hand-washing regime?
I go with the normal routine – in the bathroom, before food, around babies. I’d opt for liquid hand wash over soap, and the old-fashioned towel or hand dryer over paper towels. Save the Amazon, eh?

Quite right. Let’s conclude with a “Nice one, Gilbert!”
Thanks!

This interview first appeared in the September 2014 edition of FourFourTwo