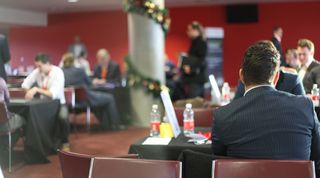 Franco Puppo is struggling. Dressed in an open-necked white shirt, the top two buttons undone to allow his broad neck the room to breathe, he stands facing a Macbook placed delicately on a podium epitomising modernity: two sleek, steel shafts supporting a slate black plinth. He looks flustered, the minimalist stand a stark contrast to his rugged beard and bulky streetfighter's frame. In the plush, decorated surroundings of the Emirates Stadium, he puffs out his cheeks, pauses for a moment and continues to plough through his presentation. But he’s struggling.

As hard as he tries to make himself heard, Puppo, the CTO of Wyscout, is fighting a losing battle. Against him, a constant and growing background chatter envelopes the room, a rising murmur of glad-handing and whispering, of hand-shakes and "Let’s do lunch"es rising to a steady crescendo – the hustle and bustle of 115 football club representatives, player agents and scouts drowning out his lecture.

Those in attendance have travelled from all over the world – from Bolivia to Belgium – to this small corner of North London in December. They’re here with colleagues to meet, deadlines to make and business to do. They’re here for action. And they’re eager to get started.

FourFourTwo is here too. Twice a year, the transfer window is a period in which the football industry bursts into maniacal life. The papers love it because salacious transfer gossip is good for business, rumour and hearsay churned out (often baselessly) to accrue web gold – hits. The so-called ITKs love it, for nothing swells a Twitter account quite like an unlikely but just about plausible transfer rumour.

And let’s face it – we, the fans, love it too. For as much as we know that it’s probably unlikely that our sister’s boyfriend’s uncle’s mother’s dog’s husband spotted Lionel Messi at the training ground, we’re all dreamers deep down. We want to believe.

But what is this time of the year like for those who actually work in the business of making the big deals happen? As the Wyscout Forum came to London, FFT got down there for a peek at what is often seen as the murky world of player scouting and transfer networking. And as we discovered, it’s becoming all a bit, well, professional.

Dubbed ‘the speed-dating of football’, Wyscout is a bold attempt to drag the whole scouting and player recruitment process into the 21st century. Founded in 2004 by Matteo Campodonico and Simone Falzetti in Chiavari, a town on the Italian Riviera in the province of Genoa, it started originally as little more than a hobby.

“We started with this idea to help clubs in scouting," explains Campodonico, "because before Wyscout there were hundreds and hundreds of unusual deals. Clubs used to buy players by just watching a DVD with the highlights of the player. We know that some clubs even bought players without watching them. Crazy huh? But it happens.” FFT almost blurts out "Ali Dia", but thinks better of it.

Campodonico began by collating video footage and uploading it to a website. Gradually he attracted interest in Italy. Genoa became the first professional club to join Wyscout and since then the company has grown enormously.

Today Wyscout has 450 pro clubs, 250 player agencies and 25 national teams as customers, with 900 games analysed per week and 60,000 full matches archived, from full internationals to reserve games played out to one man and a dog. Thousands of players from around the globe have had their performances sliced and diced so that Wyscout members can watch clip-reels of specific math actions, be that crosses from the right wing or failed interceptions. It's a hugely detailed platform, on which FFT has lost hours researching little-known players mentioned in despatches.

The Forums, held around the world, provide an opportunity for networking. And with the January transfer window firmly in everyone’s minds, a heightened sense of urgency fills the air.

For those involved in making sure the deals happen, January can be a stressful time: an enormous public deadline to complete what can be months of work. We see the finished product – a freshly-signed player in the traditional "PSG" pose (Pitch, Shirt, Grin) – but what we don’t see is the work involved to reach that moment.

"We’re busy all the time!” Gary Gill, Middlesbrough’s Head of European Recruitment, tells FFT over a quick cup of tea and a custard cream or two. “We do all our work right the way through the year, but it does become more hectic during this period, if you like.

"You feel it more at this time I guess because obviously everybody's working on this next month, certainly from agents. Going into a window you’ll suddenly receive more phone calls because people want to move their footballers out or they want to introduce their footballers to a new club.”

"We have to be cute"

It's a view shared by Rob Newman, International Senior Scouting and Recruitment Manager at Manchester City. “It’s difficult sometimes because basically we’re seen as a big club and one with a lot of money.

"So we’ve become a magnet now for every agent and every club that’s struggling for money. The way we work now, we have to be cute, we have to be smart, but we’ve learnt how to do that.”

Looking neatly dressed and ready for action, fresh-faced Hungarian player’s agent Norbert Varga offers further insight. One of Hungary’s youngest agents, Varga has just arrived in London via Brazil, having completed the transfer of a Hungarian goalkeeper to Fluminense.

“I thought this was the dream life,” he says enthusiastically, “but in reality, yeah, sometimes you work 24 hours, 48 hours, you don't sleep. The toughest part is waiting: I don’t like to wait and there’s a time difference – sometimes it’s three hours or six hours. This deal to Fluminense took six months.”

Before you start feeling too sorry for the life of a downtrodden agent, however, there are perks. “On the other hand, yeah, you come to London, you go to Brazil, you meet some nice people,” says Varga. A cheeky smile broadens across his youthful face. “Nice women too, so that’s important! And of course, you can watch football games for free. That’s the best.”

Wyscout’s role in digitising the world of football scouting is two-fold. The online platform allows easy access to player data and video, while the forums provide useful networking and deal negotiating time. In that sense, it’s football’s YouTube, LinkedIn and Match.com all rolled into one.

“Wyscout is good for us because we get to meet people that we’ve seen every year and built up relationships with,” says Newman, who is wholesome in his praise for the organisation instilled by ex-Barcelona man turned City director of football Txiki Begiristain, and adamant they won’t be doing any business in January. “I was just chatting with a Spanish agent I’ve known for about four or five years. They’re good friends.

“We also get to meet new agents here as well,” says Newman, who played a major part in David Silva’s transfer to the Etihad back in 2010, amongst others. “Polish agents, Scandinavian agents, wherever. If we’re ever over there we might say 'Oh, I’ve got his card and I’m down his way.’ I can phone them up and say ‘I’m going to this game, do you want to come? Pick us up from the airport we’ll go for lunch.’ All of a sudden a new relationship is born.”

Middlesbrough's Gill agrees. “Scouts, agents, clubs – it’s all under one roof, so it’s a useful one for us to come down to and socialise, or network if that’s the word you would want to use. And hopefully get some bits of information that we can use too. It also makes it easier to do your homework ahead of any potential travels, especially in Europe.”

Heard about that Brazilian kid?

In a sense the ‘football speed dating’ tagline rings true. For two days, this part of Emirates stadium resembles something like a downtown wine bar, the one exception being that the lonely hearts are all famous sporting entities.

Is that Bayer Leverkusen laughing and joking gleefully with Liverpool? What’s CSKA Sofia doing buying Ipswich Town a coffee? Notts County and Brondby would make a lovely couple… You wonder if even the most innocent of flirting will lead to the two clubs finding a quiet room to get down and seal the deal.

In our day behind the veil FFT hears many whispers, notably about a Brazilian youth international recently the subject of a £9million bid from a “top six Premier League club,” although we’re sworn to secrecy.

Another unnamed Prem recruitment head honcho, spotting FFT's press badge, opts for the default line: Deny all knowledge. “We do all our business way before January. But don’t print that!” he shouts across the room, as silver-haired men in sharp suits shuffle by, discussing their latest trips to Zurich or Abu Dhabi with furrowed brows.

As scouting departments in England become larger, more sophisticated, increasingly specialised and – importantly – more independent and less reliant on the whims of a manager who might only remain in charge a matter of months, there’s a permanent place in football’s ecosystem for digitised scouting platforms. The huge list of attending clubs also supports that view, though it is interesting to see Stevenage Borough represented but not Manchester United, one of three Premier League clubs conspicuous by their absence (along with Everton and Hull).

For Wyscout, future plans include client pages with the ability to upload PDFs of registered agents’ licences, a la carte independent scouting assessments, mobile phone apps and much more. “We could become the Standard & Poor's of football,” says Campodonico as he discusses eventual plans to outsource player valuations.

We may never see the likes of Ali Dia again.