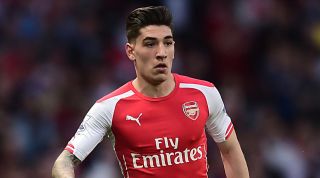 Hector Bellerin enjoyed a breakthrough season with Arsenal - and as he pauses for breath before an Asian tour and another assault on the Premier League title, he finds time to reflect on a dizzying few months...

Having seen your fellow Catalan Cesc Fabregas come across and do well, did you feel any pressure?
I think there are loads of players who have made the same step from Barcelona, not just to Arsenal, but also to the Premier League. Some have succeeded and some haven’t but obviously the fact Cesc did was a bit of motivation for me because I just thought that if he succeeded, then why couldn’t I?

Did you expect to become a first-team regular this season?
It was totally unexpected. If somebody told me at the beginning then I wouldn’t have believed them. I’m really happy with the way it went down, especially finishing the season with winning the FA Cup. It was a massive thing for me personally, as well as the team. It’s been a great year for me.

At what point did you think “I’ve made it as a footballer”?
It’s never crossed my mind because I’m still really young and still working really hard. We’ve had a few injuries at right-back and when the players come back, you don’t know really where you are going to stand. I think I just need to keep working hard and cement my place in the first team.

Were you worried at the start of the season when the club signed Mathieu Debuchy and Calum Chambers?
Well I knew I was still very young and the club needed some experience so I thought wherever I was going to play – whether in the reserves or first-team – I was going to work hard for a place in the team.

You’ve got the tour of Asia coming up at such a young age. What have your team-mates told you to expect from that part of the world?
Not too much. Last year I was in New York, which was my first tour as a senior pro, and it was really enjoyable. Not just to play the games but to get to travel around with all the players in new parts of the world – different players, cultures and how happy the people from Singapore were that we were there.

Is the passion in the Premier League what you expected?
Definitely. I think the football in England is like a religion, people follow it day by day, every single week – the passion is amazing. For us, the players, to make that many people happy and to see how into the game they are, it makes coming and playing for a Premier League team a great thing for any player.

What did you make of Jack Wilshere’s performance for England against Slovenia? Do you think defensive midfield is his position?
I think Jack can play all over the midfield, he’s a very complete player. Against Slovenia he proved it and I’m glad that he’s back after such a tough year. For him to finish the season with a performance like that, I think he deserves it.

After breaking Theo Walcott's 40m-sprint record at Arsenal, have many challengers stepped up?
There have been a few and I think some will be working extra hard over the summer to do the test again! [Laughs] For me, it’s something that comes with the game. I try to use my pace in the game and help my team-mates with it to help win the game, because I’m not trying to compete with anyone.

After the season you had, how do you see yourself one year from now?
Well I just want to keep playing like the way I have been playing this year. I know it is going to be really hard because Debuchy’s back and I don’t know whether Carl [Jenkinson] is going to be back so it is definitely going to be challenge. But, as I say, at the beginning of last season I thought my season was going to be totally different to what it was so when you ask me how I think it is going to be, I simply don’t know. All I will do is work hard and try to cement my place in the starting XI.

What is it Arsenal need to do to win the title again?
Towards the end of last season, especially, we proved that the team is improving and we can do great things. We didn’t start the way we should have and I think it’s important that we start this season the way we finished the last one. If we do that, then we will have a good chance.

What are Arsenal’s weapons against teams like Chelsea and Manchester City?
Defensively, we’ve improved a lot, there’s a real solidity at the back. All the players know each other now – there’s been a lot of players coming and going so that has always been hard. The team is really solid now and having players like Alexis and creative midfielders like [Santi] Cazorla and [Mesut] Ozil can change a game. I think the team has been really creative up front and solid at the back and if we can maintain that next season then I think we will have a good one.

Does it help you having players like Alexis Sanchez and Santi Cazorla who can speak Spanish?
I think it makes it easier for them! When they came here they didn’t speak the language. I’ve been here for four years and can help with whatever they need. Everyone helps each other, that’s the great thing about the dressing room, we have players from all over the world and everyone is really good with each other. Obviously players from the first team, the experienced ones, have helped me greatly in the dressing room.

What are your thoughts on Arsene Wenger?
I’m really grateful to him for giving me my chance. He’s really smart and has brought success for so many years, that is something people have to admire because not many coaches could achieve what he has.

You arrived in England in 2011 and you have gone from Catalan to Cockney…
[Laughs] I came here having done English at school, but I was really lucky to have great team-mates who helped me a lot. When I was living in digs I had a foster family that helped me a lot as well. Just by talking day by day with a lot of Cockneys, they have helped me talk like them. Apples and pears! [Laughs] See, I’ve got a bit of rhyming slang in my locker!

Where was the host family?
In Enfield, north London. It was really close to the training ground and they were really supportive and great with me. It’s really difficult moving to a new country. When I look at where I am now, I just think back to where I used to be and I am really grateful for that. I love London. The more you live here you get to know it, it gets better and better. Obviously it’s not just the club we are in, it’s the people, the city, you need to be comfortable with everything.

Who has been the biggest influence on your career so far?
Victor Sanchez, my under-15s coach at Barcelona. He’s assistant manager now. He taught me not just about football, but about the psychological side of it. It’s not just about the game, it’s about keeping your head right. That was probably the year when I started seeing football in a different way. My family, too. I wouldn’t be here now without their support.

Have you always been a defender?
Not at all. I was always a winger, then at Barcelona we didn’t have a right-back so they said, “come on Hector, you play there”. That just happened to be the game Arsenal’s scout saw me. I played really well and I stayed there. Steve Bould has been a massive help because it’s Arsenal that have made me a right-back.

Bellerin was speaking at the launch of the new Puma Arsenal kit.