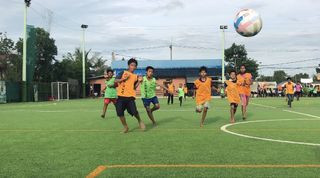 Thousands of Cambodians have celebrated after achieving the feat at the Forza Academy in Siem Reap.

The match, which lasted 84.5 hours, featured 2,734 players taking part and included youngsters of various ages, races, backgrounds and genders. It took place from Wednesday morning until the day of the World Cup final, Sunday.

That total beat the previous record of 2,357 adults in a game in Chile two years ago.

The Forza Academy, where the game was held, was founded in 2016 and works with local NGOs to solve the severe issues facing grassroots football in Cambodia.

Play-off losers Bari have been relegated from Serie B... to Serie D