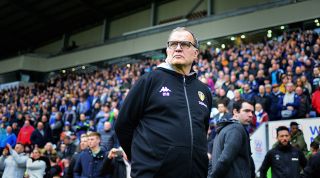 Rough-and-tumble football, hulking centre-halves, pot-holed pitches, “a tough league to get out of”. The clichés about England’s second tier are well told, and for a long time they had the added benefit of being true.

Not any more. For some years now, the Championship has been undergoing a quiet revolution. The division that was once the breeding ground for grizzled exponents of no-frills football is now a hotbed of ball-hogging teams, cutting-edge coaches and pint-sized playmakers.

The stylistic overhaul of the Championship has been underway for a few years now, but the summer arrival of Marcelo Bielsa nonetheless feels like something of a landmark moment – and indeed the speed with which he got his Leeds side playing fast, high-pressing football was little short of remarkable.

Bielsa’s team, very much a work in progress, are enjoying a near-60% average rate of possession this season. QPR, the division’s most possession-hungry side five years ago (which is as far back as detailed passing statistics go for the division), had the ball 54% of the time.

That season, Championship teams made an average of 248 short passes per game. This year it’s up to 267 – almost exactly the same as it was last season, despite the league having been shorn of its two runaway leaders in the field, Fulham and Wolves.

Such numbers reflect a change that regular viewers have been witnessing for some time. Historically, the Championship has always been good for a blockbusting long-ranger, but less so for the slow-burn type of team goal scored by Danny Graham for Blackburn (the climax of a dizzyingly intricate 25-pass move) or Ayoze Perez for Newcastle (to cap a patient possession session that featured all 11 players). Both occurred within a month of each other in late 2016.

Five years ago, the second tier’s most prolific passer was Danny Drinkwater, who totted up 66 per game – small fry compared to the work of Oliver Norwood this term, who averages 81 passes, the highest such number in the league’s short statistical history.

WhoScored lists Norwood as this season’s best-performing midfielder; behind him are Jack Grealish, Shaun Williams, Harvey Barnes, Moritz Leitner and John McGinn. Of those players, only Williams hits the 6ft mark, and then only just. Eberechi Eze, shorter than all of those at 5ft 8in, has drawn many admirers with his freewheeling recent form for QPR. As the football transforms, so do the footballers.

It wasn’t long ago that a top-flight manager would think twice before loaning a promising youngster to a Championship club on account of the division's physical nature: the thinking often went that the brutish physicality could do more harm than good. Such reservations appear less prevalent now. Mason Mount and Harry Wilson, two waif-like big-club talents, have dropped down a division and taken brilliantly to their new surroundings.

And it works the other way, too. David Brooks and James Maddison, two of the standout performers of the Premier League season so far, were recruited in the summer from Championship clubs; both are lithe playmakers but had little trouble honing their skills in the second tier.

The three players nominated for the Championship’s player of the year award last term – Ryan Sessegnon, Tom Cairney and Ruben Neves – are all technicians first and athletes a distant second; the tallest of them, Cairney, was released by his first club for being too short.

Their respective teams, Fulham and Wolves, both made more short passes per game last term than every Premier League outfit bar the top six. Rough and tumble division? Not these days.

Or at least, not so much at the top end. But to say the Championship is simply producing more technical football would be wrong. In fact, it is becoming home to a greater disparity of styles.

Yes, the most possession-oriented teams this season are making far more passes, far more short passes and far fewer long passes than anyone in the division half a decade ago. But those at the other end of the spectrum are doing exactly the opposite: the lowest distributors five years ago were Yeovil with 322; this year Rotherham have whittled that down to a mere 280.

Possession play is not spreading through the division. Rather, both sides are becoming more entrenched in their ways.

In the same way that the Premier League is steadily splitting into a two-tiered competition with a top six roped off from the rest, the Championship is similarly growing into a league with an ever-more pronounced gap between its top and bottom sides.

Obviously, money helps: the Premier League’s bulging television deal means that clubs dropping into the second tier do so with more cash – and therefore, at least theoretically, more quality – than ever before. Swansea, Stoke and West Brom are expected to rake in almost £42m from parachute payments alone this season, up from the £26m that clubs relegated in 2014/15 received. The disparity of wage bills between the fallen and those who have never played in the top flight is similarly swollen.

Largely speaking, dominance plays out in the same stylistic terms as the top flight. Just as the Premier League’s top six – Manchester United arguably excepted – have adopted a breakneck, possession-based approach, so the Championship standings largely correlate with the brand of football on display.

Cardiff from last season are perhaps the starkest exception: only three clubs averaged less possession; their pass-completion rate (59.4%) was the Championship's worst; they made the fewest shortest passes per game (207) of any side. And yet they won the largest proportion of aerial balls (34.5%) in the league, were more or less joint-second for average shots per game, finished second and are now a Premier League side.

Tony Pulis’s Middlesbrough (fifth-bottom of the possession chart, second in the league) are currently providing another glorious exception to the trend and they, along with teams like Burnley of last season and Stoke of the early 2010s, are reassuring proof that no single style of play will ever dominate absolutely; that every action will meet an equal and opposite long throw.

But in previous eras, Cardiff of 2017/18 and Boro this season would be something more akin to the norm. As recently as a decade ago, England’s second tier was a division won by utilitarian means, with a grit and gristle that was in turn relied upon to stay in the Premier League.

Now, with Championship clubs’ rising funds – combined revenues have more than doubled in the past decade – leading to an uptick in facilities as well as playing talent, the midwinter mudbaths are no longer. Now, the skilful imps are more valuable.

QUIZ! Can you name the missing sponsors from these 15 Premier League shirts?

More than a few managers will have been emboldened by the examples set by Swansea and Bournemouth too, both of whom demonstrated that top-flight survival needn’t be an ugly affair.

Precisely one in two Championship players this season are from outside of England. And with the division currently home to German, Danish, Argentine, Spanish and Dutch coaches, as well as Britons such as Paul Clement and Graham Potter who served their apprenticeships abroad, training ground orthodoxies are less parochial. Cosmopolitanism is no longer confined to the Premier League.

This isn’t a one-way shift. The Championship is still, hearteningly, a place where a long-in-the-tooth Brit will bellow at his brutish centre-half to knock it long, chasing promotion by the most direct means available. The difference is that these days, his competitor might be a tactical trailblazer from South America, sat on a bucket, urging a high press.