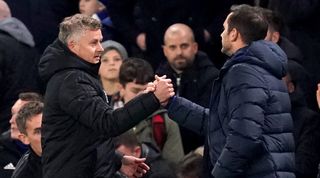 Perhaps this should be known as the nostalgia derby. Frank Lampard and Ole Gunnar Solskjaer are architects of arguably their respective clubs’ greatest moments, the midfielder the captain of Chelsea’s lone Champions League-winning side; the striker the scorer of the goal that made Manchester United Champions League winners in unforgettable fashion. Their clubs even met in a European final in a time, 2008, when they were arguably the world’s two outstanding teams.

If they do not meet as the Premier League's 4th and 8th placed sides on Monday, it is because Wolves have leapfrogged United. The mighty have fallen. The managers are throwbacks to more glorious times. They are comparable figures, the playing legends who arrived in the dugout with a well of goodwill, relatively insulated from criticism because of the place they hold in supporters’ hearts. They are slightly old-fashioned experiments in the age of the Galactico manager, a test of how much an understanding and love for the club, and a bond with supporters, can compensate for the lack of relevant elite-level experience.

And yet some of the similarities are superficial. In some respects, Lampard and Solskjaer are kindred spirits. In others, they are opposites. The Norwegian is the traditionalist, seeking to recreate United’s past, looking for echoes of Sir Alex Ferguson. The Englishman is flying in the face of Chelsea’s history, reinventing the club more than any manager since his mentor Jose Mourinho. If Lampard is the revolutionary, Solskjaer is the counter-revolutionary.

A shared willingness to trust in youth is the most obvious common denominator in their management. They are the two permanent managers to have named the youngest sides in the Premier League this season. They have omitted or exiled older players with distinguished pasts – Alexis Sanchez, Nemanja Matic, Ashley Young and Chris Smalling at Old Trafford, Olivier Giroud, Pedro and Marcos Alonso at Stamford Bridge – to prioritise the emerging and the homegrown.

If Solskjaer’s inspiration is obvious, and not merely because he frequently mentions Ferguson, Lampard is acting as the antithesis of his old managers. His long-term sidekick John Terry was famously the last Chelsea youth graduate to become a first-team regular. Now, with Tammy Abraham the top scorer, Mason Mount having only missed one game all season, Callum Hudson-Odoi and Ruben Loftus-Cheek fit again, Reece James’ precociousness meaning Cesar Azpilicueta can be relocated to left-back and Fikayo Tomori’s promise, there is a host of them.

Chelsea’s philosophy revolved around producing promising youngsters, but sending them out on endless loans before eventually profiting. They institutionalised short-termism. They invariably signed when they could have promoted from within. And even when they acquired talented young players, such as Mohamed Salah, Kevin De Bruyne and Romelu Lukaku, they were handed too few opportunities and instead made their explosive impacts elsewhere. Lampard seems a repudiation of their past, determined to ensure the same mistakes will not be made again. He is not repeating the past, but learning from it.

If there is a fundamental difference, in that Solskjaer made a choice whereas Lampard’s philosophy was enforced in part by circumstances. His pragmatism has nevertheless altered an ideology. Lampard could not spend, first due to a transfer ban and then through Chelsea’s inability to land targets in January. Solskjaer, in contrast, has spent the best part of £200 million. While United have won both of their meetings so far this season, their inferior league position is not the only indication that Lampard is doing the better job.

He appears a manager of the modern age far more than Solskjaer does. There's a sense United's manager hasn't recognised football has developed in the last dozen years, that the Pep Guardiola-inspired increase in possession means that if you don’t have a strategy with the ball, you're automatically forced into a counter-attacking game.

In a sense, each is the anti-Mourinho, but Lampard seems to recognise his former manager’s reactive football is not as successful as it once was. Rather than replicating it, he has produced something contrasting: a more attacking team with a worse defensive record than the Portuguese’s Chelsea sides, lacking their consistency, physicality and unbeaten home form but with a greater emphasis on the future.

If Solskjaer and Lampard’s willingness to hand opportunities to emerging talents suggests a similar readiness to trade short-term pain for the prospect of long-term gain, the results have, thus far, been different. Only one is suffering. The United manager is underachieving whereas, should the Englishman keep Chelsea in the top four after losing Eden Hazard, he will have overachieved. Solskjaer is the unsuccessful tribute act, Lampard something more substantial and original.