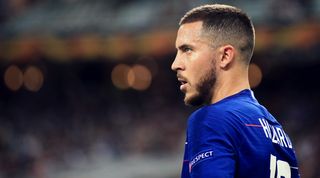 THEN TRY: Quiz! Can you name the 30 most successful clubs in world football?

Some weeks, the game was over before it had it even begun.

You knew that even when he wasn't on his game he could do still shock the world. Just ask Tottenham, who were fighting for the title. Or the Swansea ballboy.

Since Jose Mourinho graces our cover this issue - out in all good stores today - we thought we'd look at back at some of his most iconic players.

And who could forget the season that Eden Hazard stormed to the PFA Player of the Year title and led Chelsea to the league title?

We've listed all the teams that Eden scored against in his time in the Premier League. That's 27 - not bad going considering he basically had a year off the following season.

CHELSEA Something isn't working for Kepa Arrizabalaga at Chelsea – can Frank Lampard find a way to fix it?