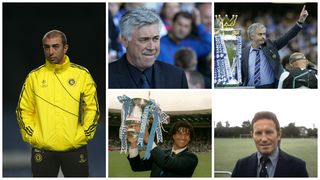 Arrived at the Bridge from Porto as the self-styled ‘Special One’ and quickly went about proved it, winning the Premier League title with a record points total of 95 and – despite having a reputation as a defensive/counter-attacking coach – in some style too, playing with two out-and-out wingers in Arjen Robben and Damien Duff.

A fine centre-forward for Arsenal and England in the 1930s, Drake made sweeping changes at Stamford Bridge, removing the Pensioners from the club’s nickname and logo, putting more emphasis on ball work in training and eschewing big-name signings in favour of scouring the lower leagues for untapped talent. The results were spectacular.

Within three years, Chelsea had won their first-ever league title, Drake becoming the first to do so as player and manager. Though further silverware eluded him, he later brought through a talented crop of youngsters including Bobby Tambling and Jimmy Greaves.

Took ‘Docherty’s Diamonds’ (see below) and polished them into a cult team, winning the FA Cup and European Cup Winners’ Cup with the likes of Peter Osgood, Peter Bonetti, Alan Hudson and Ron ‘Chopper’ Harris.

The Londoner was a coach first, manager second, studying teams abroad and encouraging a passing game based on tactical discipline and interchanging of positions. On the downside, he struggled to control the team’s King’s Road set, which eventually prompted his departure.

A more progressive coach than many of his countrymen, the amiable Italian arrived with a big reputation and left with it intact courtesy of Premier League and FA Cup wins in his first season.

Like many in the Abramovich era he then paid for one below-par campign as the Blues came in well behind Manchester United in the league and came up short in the Champions League – a title Ancelotti was expected to deliver. He’d done it before, he’s done it since, and given a little time, who knows? Deserved better that being sacked just hours after Chelsea’s final league game of the season.

A better coach than psychologist, Hoddle arrived as player-manager at the Bridge off the back of working miracles with Swindon. He left to coach England, having made the Blues easy on the eye, competitive in the cups and – with Hoddle’s reputation as a player, particularly with Monaco – attractive to foreigners looking for a move to the fledgling Premier League.

None more so than Ruud Gullit, arguably the most important signing in the club’s history.

There has to be a place for Chelsea’s only Champions League-winning coach, even if he did inherit the spine of a team built by Mourinho.

Having scored two FA Cup final winners as a midfielder for the Blues, the Italian was already in credit when, following promising spells in charge of MK Dons and West Brom, he succeeded Andre Villas-Boas, who had hired Di Matteo has his assistant.

The caretaker more than steadied the ship, though, winning the FA Cup as well as Old Big Ears, as Chelsea – without the suspended John Terry – memorably beat Bayern Munich on penalties after the Germans dominated a 1-1 draw. The bar had been set high – too high, in fact.

Having been handed a two-year contract in June, Di Matteo was out of a job by November, sacked with Chelsea on the verge of Champions League elimination. Harsh.

Long before Hoddle, Gullit and Vialli became successive player-managers, The Doc was Chelsea’s first, succeeding Ted Drake not long after being made player-coach.

His career as a fine wing-half was already winding down by then, and after achieving promotion during his first full season in the hotseat, he set about building an exciting young team.

‘Docherty's Diamonds’ finished fifth in Division One twice, won the League Cup in 1965, reached the FA Cup final in 1967 and various semi-finals. More importantly, though, he paved the way for the success that followed under Dave Sexton.

Inherited a good team from Gullit and made them better, winning the 1998 League Cup and European Cup Winners’ Cup within months of his appointment, taking the calibre of Chelsea’s foreign signings up a level – even if he eventually fell out with many of them – and turning them into a consistent top-flight force.

Their third-place finish in 1999 was their highest since 1970 and led to a first-ever Champions League appearance, including a memorable 3-1 win against Barcelona, albeit in a losing cause over two legs in the quarter-finals. An FA Cup victory followed in 2000, by which time Vialli had hung up his boots, but it didn’t prevent him from receiving the boot just five games into the following season.

What would have become of Chelsea and Gullit’s management career had the Dutchman not been sacked by Ken Bates, with whom he clashed, when the team were second in the Premier League and in the quarter-finals of two cups (they won both)?

Gullit had already entered club folklore for guiding them to a first major trophy for 26 years (the 1997 FA Cup), precipitated by his unexpected arrival as a player in 1996.

Another Chelsea manager who never got to finish what he’d started, Neal brought Kerry Dixon, Pat Nevin and other members of John Hollins’s much-loved team of the late-’80s to the club, guiding them to promotion then 6th in the top flight, before being forced to retire due to ill-health.

Willian: All I want is to forget about this season

What's it like to be a feeder club? How Vitesse fans really see their Chelsea partnership

Chelsea's first manager was also their longest-serving, but fell just short when it came to claiming major honours.

Twice relegated from the top flight and twice promoted, the Scotsman led the Blues to the only wartime FA Cup final in 1915, and lost three other semi-finals, as well as blowing a lead in the 1919/20 First Division title race.

Notoriously media shy, he hit the headlines in 1930 for forking out £25,000 on fellow Scot, Hughie Gallagher.

From Chelsea’s most durable manager to their most successful. Both caretakers have a 100 per cent record. Played one, won one. Can't argue with that.