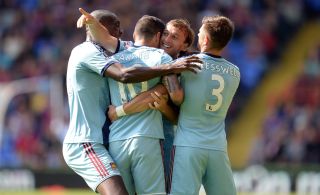 Boring boring Big Sam, eh? West Ham swept Palace aside on Saturday - scoring as many goals as in the three other 3pm Premier League kick-offs combined - as the visitors helped banish memories of last weekend's last-gasp heartache at home to Tottenham with some lethal finishing.

Attacking coach Teddy Sheringham's magic is working wonders already then? "If we continue to show the finishing qualities we showed today I don't mind him taking all the credit," quipped Sam Allardyce afterwards.

"There's a lot of things that Teddy can talk about and do with them [the attacking players] on his own in little groups. I think they look forward to it and he's fitting in very well. The only problem we have is the sport scientists saying he's out there too long with them.

"I saw that performance last week and I'm glad to see that performance again this week in our first away game. This time around the quality of our finishing was absolutely superb. Opening Crystal Palace up has always been very difficult and you could see that by the quality of goal we had to score to beat them. Palace couldn't complain, they couldn't defend against the quality of those first two goals. That was the icing on top of the cake for a great first half performance."

Both sides initially made two changes from their respective opening day London derby reverses to Arsenal and Spurs. Palace brought in Damien Delaney and Barry Bannan for Scott Dann and Jason Puncheon, but the home side's preparations were further disrupted when Joe Ledley sustained an injury in the warm-up.

Three of the last five Premier League meetings between the sides had ended in 1-0 wins for the Eagles, and the early signs of a repeat were promising. Martin Kelly's determined run into the penalty area forced a corner which eventually ended with Fraizer Campbell's weak header being gathered by Adrian.

West Ham, meanwhile, had won just one of their five London derbies away from home last season. But they had not been beaten in both of their opening two Premier League games since 2010/11, and Cheikhou Kouyate's command of the midfield area in the opening 10 minutes offered promise; the Senegalese making 4 ball recoveries and 2 interceptions in the first 10 minutes.

As the first half progressed the Hammers were enjoying more possession, 62% after 20 minutes, but most of it was in their own half and Palace were asking just as many questions in the final third of the pitch.

Half an hour in, and West Ham had mounted up the efforts (7 to Palace's 2) although goalkeeper Julian Speroni hadn't been seriously tested...

...until Zarate took aim from 20-yards, volleying home after Mark Noble's initial strike had been deflected into the Argentine's path.

"I think the lad has grown up and matured," said Big Sam. "I can remember his spell at Birmingham with Alex McLeish and he's been to Italy since then and back to Argentina. At his age he's now a mature player with a lot of qualities in the final third which is something different to what we have. He's taken his opportunity brilliantly today and hopefully he can continue to improve."

And one goal became two within three minutes courtesy of another cracker; Stewart Downing cutting inside from the right flank and guiding his shot into the far corner.

By the break, the increasingly confident Hammers had registered 12 attempts on goal with seemingly no way back for the managerless Eagles.

Noble was the half's best passer, completing 39/48, while Ricardo Vaz Te had created a game-high 3 chances for his team-mates.

Mile Jedinak and Marouane Chamakh had worked hard to win the ball back and try and stir some life into Keith Millen's charges, but the Palace boss admitted afterwards that his team had been flat.

"The first half was disappointing, we never really got going," he said. "We spoke about being at home and it being our first home game of the season, the atmosphere, the expectation, but we were flat. We never really found any sort of tempo to our pressing and we allowed West Ham to control a lot of the game. We had a couple of chances before they scored where we could have taken the lead but then we were lacklustre.

"I got into them at half-time and I was pleased with the response. We got the goal and then it was game on. The atmosphere changed and we were on the front foot."

Indeed, they woke up after the break, but not before surviving an almighty scare when James Tomkins headed a corner onto the underside of the crossbar. Palace went straight up the other end and reduced the deficit through Chamakh's low larrup.

"It looked like we were going to clinch it," admitted Big Sam. "I was up off my seat when Tomkins headed the corner against the bar, and it just shows you have quickly the game can change when Palace went down the other end and scored; the lads doing exactly what we told them not to do and let Palace get back in the game. That lifted the crowd and the players, but that only lasted about 10 minutes before we took control again."

Urged on by their feverish support at Selhurst Park, Palace went in search of parity. Bannan saw a fierce drive denied by Adrian and the Eagles were in the ascendancy.

But they shot themselves in the foot after 62 minutes. Damien Delaney's calamitous clearance allowed Carlton Cole to sweep the Hammers back into a two-goal lead.

And with that, Palace's challenge wilted. The visitors were able to see out the remainder of the game with relative comfort, and could have added to their lead with the imperious Kouyate denied by Speroni.

The only thing missing from the former Anderlecht midfielder's display was a goal, registering 2 shots, setting up 1 chance, completing a game-high 4/5 take-ons, making 13 ball recoveries (more than any other Hammer) and winning all 6 of his tackles and 5/9 aerial duels.

"He's got 'modern day midfield player' written all over him," said Allardyce. "The one thing that may be missing is a goal or two, but he's high-energy, two-footed, great box-to-box, competes in the air, tackles. It's great to see a player who has a smile on his face. He's lived his dream coming to play in the Premier League."