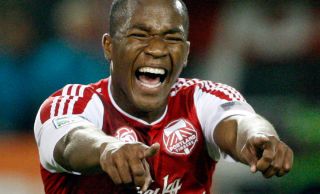 Portland Timbers’ Nagbe is developing a habit of scoring wonder-goals. In June 2013, he finished a good passing move with a no-look curled finish – a contender for goal of the season. But awards are nothing new
to him thanks to his 2011 worldie, which the Liberian recreates for FFT now...

“Jack Jewsbury crossed the ball and Kansas keeper Jimmy Nielsen punched it away. My job was not to lose the ball, so I just juggled it. My first touch wasn’t good enough, so I took another. The whole time, all I was thinking was ‘touch and shoot’. When I did, it went in.

“I was very excited. Before that game, the coach had told me I’d score my first MLS goal that night – that’s why I ran over to the sidelines when I did. We were at home and everyone was screaming – it was crazy. The energy is always great; Portland is a fantastic place to play. The only negative was we lost 2-1.

“After the game, my phone went crazy. Everyone was calling and texting me: my agent, my high-school coach, my college team-mates... my father Joe [former captain of Liberia] said it was one of the best goals he’d ever seen. My mother cried, but then she often cries when she’s happy.

“A lot of players go through an entire career without scoring a goal like that. I got lucky that I did so early in my career. It was later voted 2011 MLS Goal of the Year. It was unbelievable: I never thought I’d win something like that in my first season.

“I haven’t tried to recreate that goal – I couldn’t do it again – but kids on Facebook have told me they tried and can’t do it. That’s kinda funny.”

This interview originally featured in the September 2013 edition of FourFourTwo magazine. Subscribe!