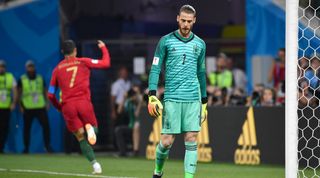 De Gea endured a tricky start to his World Cup campaign against Portugal in Group B, infamously letting a Cristiano Ronaldo strike slip through his fingers in the second day's dramatic 3-3 draw in Sochi.

Spain beat Iran 1-0 in their second match, though, so he does at least have a clean sheet to his name.

Bizarrely, however, the 27-year-old Manchester United man hasn't actually made a save at this World Cup according to stats compiled by FIFA.

Mexico's Guillermo Ochoa has been the most active goalkeeper in Russia so far, having made 14 saves, while Denmark's Kasper Schmeichel trails in second with 10.

Thirty other net-minders who've played in this World Cup have pulled off a minimum of one save, which means De Gea is joined only by Russia's Akinfeev on zero.

Spain face Morocco in their final group match in Kaliningrad on Monday night, where maybe - just maybe - the Roja custodian will be put to the test. Secretly, he'll probably be hoping so.