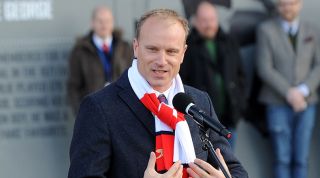 Dennis Bergkamp has told FourFourTwo that he is interested in making a return to English football – and that Arsenal would be his ideal destination.

To mark 25 years since he joined the Gunners as a player, Bergkamp has given an in-depth interview about his career in football in the August 2020 issue of FFT – out in shops now and available to order online with free delivery.

The 51-year-old established himself as an Arsenal legend during 11 years at Highbury, before retiring in 2006. He then went on to spend nine years on the coaching staff at Ajax, where he began his career as a teenager.

But Bergkamp left Ajax in December 2017 and says he’s starting to get the itch to return to coaching. A comeback in English football is appealing.

“When the time is right, I’d love to go back and get a role somewhere,” he told FFT.

“At the moment we’re great in Holland. I’ve got a young family and have been out of coaching for a little while now. But I must admit, I have the urge to go on the pitch again and help, whether it’s with the technical or coaching staff.

"It might be a bit too early, but you never know. We’ll see what comes my way.”

It’s little surprise that, given the choice, a return to Arsenal would be his dream role – even if no discussions have taken place at this stage.

“At the moment there hasn’t been any contact about that, but as soon as I make my decision, let’s see what happens,” Bergkamp said.

“Of course it would be ideal at Arsenal – I spent 11 years there and have a good feeling with the club.”

Thierry Henry and Patrick Vieira are both managers now, with Montreal Impact and Nice respectively, and Bergkamp was asked whether he’d like a return to the club with one of his old team-mates in the future.

“I follow how they’re doing from afar,” he said. “It’s a shame that MLS stopped after Thierry took a job there, and Patrick is doing well at Nice.

“I’m really interested in Mikel Arteta and how he’s doing at Arsenal, as there have been signs that he wants to change their philosophy. It looked good in the few matches I watched earlier in the year.

"But my future, who knows? In football, one day is not the same as the other.”

Read the full exclusive with Dennis Bergkamp in the August 2020 issue of FourFourTwo. We also remember more era-defining icons, ask Djibril Cisse your questions about a colourful career, hear Nile Ranger's startling confessions, remember when Celtic halted Ranger’s charge for 10 in a row, chat to Bayern’s Joshua Kimmich, mourn Atalanta’s season of muted celebrations and much more. Grab your copy in shops or online!