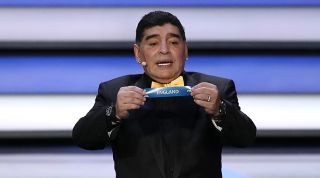 We haven't heard much about Diego Maradona lately, and that's because - quietly, would you believe - he's been managing in UAE. El Diego has been head coach of Al Fujairah, in the country's second tier, since 2017.

Or at least, he was. An announcement was made over the weekend that the Argentine had left the club after failing to secure promotion to the Arabian Gulf League, and that his contract had been ended by mutual decision.

Yesterday, though, it was announced that Maradona had rejoined the club and signed a new one-year contract.

Which is all confusing enough, but hardly surprising given who it involves. And there's more – of course there is. Shortly after Al Fujairah's official Twitter account had tweeted his return, Maradona's lawyer took to social media to deny that any new contract had been signed.

Maradona, who turns 58 at the end of the year, has had a less-than-spectacular managerial career. His ill-fated spell with the Argentina national team, which ended with that humbling World Cup defeat to Germany, was over eight years ago now and he's been employed solely by Middle Eastern teams since. Between 2011 and 2012 he took charge of Dubai-based Al Wasl, lasting just 22 games and winning only seven.

His record at Al Fujairah has been much better, and at the time of his departure (or rehiring... or whatever it is that's actually happening), he had a win percentage of 52.3%, with just a single loss in 19 games.