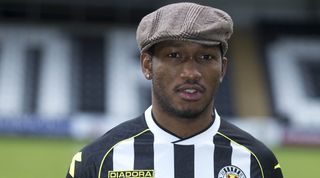 Following the announcement that he has signed for St Mirren, former Manchester United midfielder Eric Djemba-Djemba has outlined his plan to secure a call-up for Cameroon’s World Cup squad.

The 32-year-old’s contract at Serbian side Partizan had been terminated, leaving him free to sign for the Scottish Premier League side.

Cameroon boss Volker Finke hasn’t selected Djemba-Djemba in his recent squads, opting instead to pick pairings from the 900 better Cameroonian footballers in that position, but Djemba-Djemba believes his transfer is the first significant step towards winning the German tactician over.

“For me everything is building towards the World Cup,” Djemba-Djemba told FourFourTwo.

“It’s obviously my dream to play for my country again and I will do whatever it takes, whether that’s an unlikely renaissance at a lowly Scottish Premier League team or the slaughter of several hundred rivals – whichever is quicker, I guess.”

Although Djemba-Djemba’s career has been underwhelming at times, he regularly makes lists of the Top 1000 Active Cameroonian Midfielders and was recently voted the 19th Best Player To Have A Double-Barrelled Name With The Two Bits Of That Double Barrel Being The Same.

St Mirren manager Danny Lennon admits that Djemba-Djemba may have a problem with match fitness, but insists that the opportunity to sign him was too good to miss.

“We’re talking about a man who has watched games at the very highest level,” Lennon enthused.

“He’s worn more yellow bibs than most us have had hot lunches, he’s been on the bench for Champions League games, and flicked around with the TV remote in a hotel room at a World Cup. That kind of experience is invaluable.”

Reports suggest that Djemba-Djemba has already settled in Paisley, adorning the walls of his room with a map of Renfrewshire, Polaroid photos of Cameroonian midfielders and the phone numbers of international assassins.