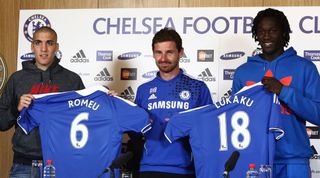 Now take your pick from this list of 23 Chelsea players currently out on loan, and choose a second XI to play against them. I've gone for: Courtois, Wallace, Omeruo, Chalobah, Van Aanholt, Marin, Romeu, Piazon, T. Hazard, Atsu and Lukaku.

Seven of those players are full internationals. Thorgan Hazard just won the Golden Shoe award for best player in Belgium, where he's on loan at Zulte Waregem. Kenneth Omeruo has played a starring role for his country, Nigeria, winning an African Nations Cup, yet has never played for the Blues. Oriol Romeu was once touted as the heir to Sergio Busquets at Barcelona. Romelu Lukaku scored 17 Premier League goals for West Brom last season. Thibaut Courtois was recently rated by FourFourTwo as the 50th best player in the world (and the third best keeper).

You might think, seeing such a list, that Chelsea would have enough talent in their ranks not to have to dip into the market to hijack their rivals with last-minute deals. But no. Willian was pinched from under the noses of Spurs. And now, with Liverpool on the cusp of signing one of African football's brightest young talents (not Atsu, but Chelsea have him too), the Blues hijack the bid for Mohamed Salah and sign the explosive and stylish winger at the last minute.

Although all is fair in love and war, and indeed many will find it quite funny to see other big clubs getting gazumped by Mourinho, at some point you have to stop and wonder where all this is going. Look at the case of Kevin De Bruyne. Bought by Chelsea in 2012 for £7 million, he started just five games, stuck in the shadows of a gigantic squad, making a few fleeting appearances before being sold to Wolfsburg for a cool £10m profit.

Bertand Traore, another player widely considered one of African football's shining beacons of hope, was signed by Chelsea and then loaned to Vitesse Arnhem - essentially a CFC feeder club - the very next day. Vitesse, by the way, are joint top of the Eredivisie with five Chelsea players in their ranks; Lucas Piazon is perhaps one of the biggest stars in Holland this season.

Gael Kakuta, once a big prospect who caused a high-profile rumble in 2009 when Chelsea were banned from signing players for two transfer windows in a tapping-up saga, later overturned, just returned to west London after failing to make it at Vitesse. Like De Bruyne, it's probably fair to say Kakuta won't make it at Chelsea, and his frustrated comments last March were revealing.

"I don't dream about Chelsea any more - I used to, now I know better," Kakuta grumbled. "Chelsea have far too many players. At my age I need to play regularly, but if I go back I'll just get 10 minutes a month and I don't want that."

Chelsea's strategy, from the outside, seems pretty clear. If these guys don't make it at Stamford Bridge, which naturally Roman Abramovich & Co. hope they will, they will be sold on - most likely at a profit - to other clubs, having had a nice shop window in Spain, Holland or Italy through which to promote themselves. "The club bought him a couple of years ago for a small fee and now we have a possibility to sell him for a positive amount," Mourinho said of De Bruyne's departure. It is youth recruitment as business strategy. Some might call it gaming the system.

Of course, none of this is untoward. Chelsea are well within their rights to do this and you might even applaud them for acting intelligently within the boundaries of a system that seems totally geared towards football's super-rich. The Blues have an entire division, led by technical director Michael Emenalo, that oversees this operation, buying and selling exciting young talent like stocks and shares.

"Emenalo is working hard and choosing the right place for the players to go and play, to evolve," Mourinho said last week. "We watch them every weekend. The information comes to me online immediately, so I can know where Chalobah is, little Hazard, what they do.

"We have contacts with their coaches and their clubs. It's not something you can just click and make happen. It needs time. The academy is very well organised and the transitional period [into the first team] is something that the club is having a lot of care with."

As a strategy to acquire and integrate the best youngsters around into Chelsea's setup, this is all well and good and has many benefits. Plenty of other clubs around Europe act similarly too, Porto and Benfica being two examples. But taking this model to its logical conclusion, is there not a risk that eventually, somewhere down the line, youth football could end up being cordoned off by all but the world's megaclubs?

What is to stop a Chelsea or a Manchester City from buying the 20 best players at the next Under-20 World Cup and just loaning them out constantly until they can ascertain whether they'll make the grade?

Of course there are benefits for the recipient clubs in the short term, but in the long-term the negative aspects are clear. This summer, Everton could reach the Champions League and then see their best striker hop off back to Stamford Bridge, leaving them with no forward, no saleable asset and no money to buy a new one. Atletico Madrid have the benefit of a keeper worth €30m, and all the positives Courtois has brought over his years on loan, but when he leaves, he leaves for nothing. The player's value is in Chelsea's hands. It encourages short-term thinking for all but the richest.

A scenario could eventually occur whereby only a handful of clubs will actually be making money from transfers. Add the EPPP and Financial Fair Play into the mix and the soup gets even more peppery.

The loan system in its current incarnation has been the subject of criticism of late. In Holland, NEC Nijmegen technical director Carlos Aalbers questioned Vitesse's tie-up with Chelsea, suggesting the authorities tighten rules on the number of loan players a club can sign.

Arsene Wenger too thinks it needs a rethink and called for reform to allow players to play against their parent clubs - another aspect of the loan system that skews competition. "Once you are on loan, it should be a transfer – you play for the club," Wenger reasoned. "You cannot play for the club only in 36 games and not against another club.”

At the moment, Premier League rules permit a squad list of a maximum 25 players over 21 and a maximum of four loans allowed in one season, but there are no laws limiting the number of players clubs can loan out. Perhaps this needs changing.

Capping the maximum number of loans out per season to around 10 would restrict the stockpiling of players, make players and agents think twice about the next career move and allow other clubs to be more competitive in the market, rather than having to rely on loan deals to borrow good players.

Chelsea might have made Liverpool a Salah dodger on this occasion, but the vagaries of the loan system in its current form make it easier for football's giants to live off the fat of the land.