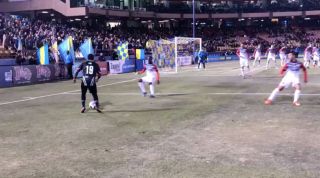 Adu made his professional debut for D.C. United 14 years ago, becoming the youngest ever player in professional U.S. sport full stop.

At the weekend he came off the bench on the hour mark in a pre-season friendly for USL side Las Vegas Lights - an expansion outfit who began professionally this year - and assisted their second goal in a 4-2 defeat against his first club.

Adu's story as an over-hyped teenager is well documented. Now, after playing for 12 different clubs around the world including Benfica and Monaco, he's returned to play in America's second tier having re-discovered his love for football.

He tweeted in January: "Have made a decision to start fresh after a year away from soccer. This decision is solely based on the fact that I want to play as much as possible this year then move forward from there. Have discovered my love for the sport again."

Celtic's Scott Brown celebrates getting fouled in the Scottish Premiership