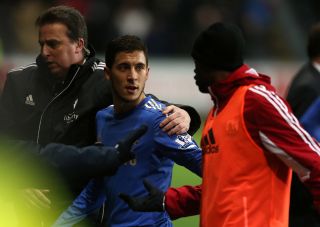 When footballing controversy meets social media, the result is rarely handsome. So it comes as no surprise to see much bickering over Chelsea playmaker Eden Hazard's petulant prod at a Swansea ballboy during the dying minutes of Wednesday evening's League Cup semi-final second leg.

No sooner had Hazard sheepishly removed his gloves and departed the area of play, than two distinct schools of thought were formed.

The first theory insists that there's no excuse for kicking a child (although at 17 he's probably already attempting to buy booze and sneak in to over-hyped Quentin Tarantino movies) - an entirely blameless victim in the whole sorry episode. Subsequently, Hazard should be handed a lengthy ban akin to that doled out to Eric Cantona following his infamous karate kick on Crystal Palace fan Matthew Symonds in 1995. After all, this was basically the same.

The second theory insists that Hazard was well within his rights to attempt to prod the ball out from underneath the insolent ballboy, who brought the torso-toeing upon himself by seeking to waste those last few valuable seconds Chelsea could have spent knocking the ball about without really creating decent goalscoring opportunities. As self-appointed sportsmanship tsar and social-media guru Joey Barton says: "Hazard's only crime is he hasn't kicked him hard enough."

Competing theories are what makes the internet the go-to destination for an argument. In the desperation to win the battle, nuance is negated, balance obliterated by bias. Those who attempt to see both sides are quickly drowned out in the need to shout the loudest. And it's not just the internet: countless TV pundits have witlessly wittered that "if it's not a penalty, it's got to be a booking for diving", overruling Isaac Newton by precluding any possibility of gravity. In a contact sport, there will be grey areas. If only we had independent arbiters with years of experience to judge them.

Perhaps it's indicative of the necessarily divisive psychology of sport: us against them. Football fans are encouraged from childhood to be tribal, and to shout louder than the opposition, so perhaps it's a bit much to expect them to remove the blinkers and quietly debate the issues. We require winners and losers, goodies and baddies, and the media is quick to join in with it - especially if it fuels lucrative phone-ins and polls, and fills the endless hours of broadcast.

But back to Swansea, where the story should be about an attractive footballing side gaining just reward for enterprising football and bucking the trend of the big boys powering their way to cup finals even when employing their shadow squads. Instead it's an untidy squabble and an undignified scramble to present the events as a black-and-white issue: if you deride one side, you must be declaring loyalty to the other.

There is a third possibility: that both Hazard and the ballboy were in the wrong, and both should be punished. One suspended for three competitive first-team matches (the standard punishment following a dismissal for violent conduct), the other banned from ever again darkening a top-level touchline and forced to get himself a haircut that doesn't make him look like a giddy One Direction fanboy. Then we can all move on, with the world just about able to continue spinning on its axis.

We think option C may just be the best bet.