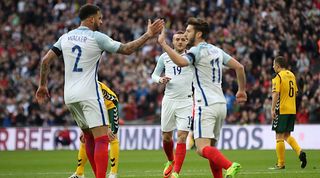 Qualifying games are the great false economy in international football, offering only a tenuous glimpse of how the future may look. Especially here, especially now: the English national team still bare the scars of that chastening night against Iceland nine months ago, and a home game with Lithuania offers little chance of redemption. The public remain uninterested, driven to boredom by too many failures, and World Cup qualifying Group F lacks the organic challenge to be re-engaging.

But here we are and here we go again: England are under Gareth Southgate's stewardship now, with the FA appointing from within to join the final dots of Dan Ashworth's England DNA initiative. The national team are a top-to-bottom enterprise now, bound by ideas which run from the U16s to the senior squad. Southgate is the human face of that jargon and the Kelly LeBroc of Ashworth's Weird Science: St George's Park's first test-tube coaching baby, if you will.

But what is this new England and how do they differ from their many flawed predecessors?

Jermain Defoe was picked to start on Sunday which, in any other recent era, likely wouldn't have happened. Football has become very forward-thinking, with the temptation to select with one eye on tomorrow rather than both on today. Defoe is thoroughly deserving, his goalscoring record in the current Sunderland side representing a minor sporting miracle, but he will turn 35 in October.

His involvement here, then, was the kind of form-based decision which England have long been chastised for not making. Southgate's forward cupboard is particularly bare at the moment, with Harry Kane and Wayne Rooney both injured, but there were still younger options available and selections which could have been made with longer-term development in mind.

Jermain Defoe is the 22nd player to reach the 20-goal landmark for England.

But is it always so smart to defer to a future which might never arrive? The national team has to make some concessions to burgeoning talent but, as long as it's done in moderation, there is no inherent problem with overlooking age for the sake of achieving some quick bounce - and Defoe made that case strongly. In the first half he slithered unnoticed into space to force a good save from Ernestas Setkus, before being in the right place to covert Raheem Sterling's calm cutback minutes later.

It will be many months until it's known whether Defoe-type selections are a consistent part of Southgate's repertoire, but this one certainly adhered to the FA's new governing philosophy. "Game strategy" lies at the heart of England DNA and it refers to the manner in which matches are prepared for and reviewed. Any opposition analysis on Lithuania would have stressed the need for a compact forward who specialises in slipping through a defensive line, evading his markers, and capitalising on quickfire opportunities.

And despite his age, Defoe remains English football's great specialist in that specific area.

That he started this game may not represent a trend, but it did perhaps provide an early indication of England's willingness to shift towards a more situationally smart selection policy.

2. England are now a team of quicker temperament

Lithuania are a limited side with no realistic hope of qualifying for the World Cup. As expected, they were very much a passive force at Wembley, happy to sit behind the ball and congest England's creative avenues. Nevertheless, even if the hosts didn't always play with the greatest accuracy, there was at least the intention to move possession with speed and precision. That comes with the acknowledgement that their opposition weren't the best, but the same was largely true in Dortmund against Germany on Wednesday night: England lost, but their angles were typically sharper and their off-the-ball movement (especially in the deep attacking areas) was certainly the more threatening.

Wembley can be a difficult place to play, especially on mild, sleepy Sunday afternoons when England are expected to win at a canter; it's not an environment which inspires much temperament.

Still, it's worth remembering that one of the constant criticisms of Roy Hodgson's team centered on their glacial-paced phase-building and recognise that, even at this primitive stage, Southgate's side appear committed to doing more with the ball in less space - and to doing it quicker. Lithuania faced a new forward line – led by Defoe and supported by Sterling, Adam Lallana and Dele Alli – which lacked the grease which comes from continuity, but nonetheless endeavoured to play one- or two-touch football around the penalty box. Sometimes the gears grinded awkwardly and sighs tumbled down from the Wembley tiers, but the expressive intent was still welcome.

Was it effective? Not always, but it was a healthy departure from death-by-possession, a deep-lying Rooney, and everything else associated with last summer. In his programme notes, Southgate stressed the importance of playing at a greater speed and, if possible, of entertaining the crowd. Success in that department remains some way off, of course, but those pre-game urgings would seem to be more than just appeasing rhetoric on this showing.

English domestic football hasn't quite been "revolutionised" by the growing emphasis on full-backs at club level, but the thread binding the best sides in the country is the mileage they typically extract from the position. In midweek, when Southgate made reference to "getting off the island", he presumably meant that he - and his technical staff - intended to draw inspiration from further afield than the Premier League. Still, the ideologies of Conte, Pochettino et al have clearly left an impression, because England's attacking shape was framed by Ryan Bertrand and Kyle Walker, with both operating more as orthodox wingers than defenders.

This wasn't just the provision of width from deep, but a tactical plan designed to stretch the pitch and and provide the cohort of attacking midfielders with as much as space as possible to operate within. It's a basic principle and hardly a revelatory tweak, but England have so often failed to conform to modern standards that it was heartening to watch them adhere to a contemporary norm.

Maybe that was a mind-trick created by a docile opponent, but even with that asterisk it was still a strategy that worked and which, more importantly, helped to ensure that this was as easy a victory as it was always likely to be.