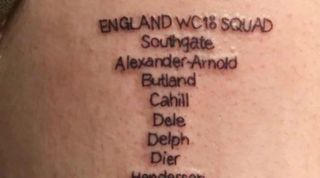 England face Sweden in Samara on Saturday after successfully overcoming Colombia in the last 16 on penalties.

For virtually all Three Lions fans it was a joyous occasion, but you may question whether it was a good day for supporter Dan Welch, who knew he had a promise to fulfil.

In May, he tweeted: "Putting my neck on the line, but if @England get to the quarter-finals with that squad, I will get the 23-man squad names tattooed on me."

Welch has followed through with his pledge and got those names permanently stamped on himself. He's even gone a step further by including Southgate's name at the top too.

Another thing for the CV, Gareth.