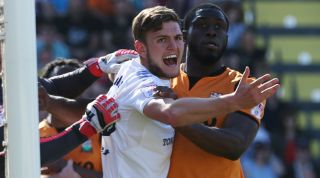 The 21-year-old – the Leicester defender's younger sibling – has been struck by "Russian flu" according to manager Martin Allen, who penned another typically casual post on Chesterfield's website.

The defender is expected to be a part of Allen's plans for the upcoming National League season, but he's been granted permission to make the mammoth journey to Samara this weekend.

Allen wrote on the club's official website: "Good morning. Laurence Maguire has unfortunately picked up Russian flu, which is obviously quite disappointing.

"I’ve had a word with him this morning and told him that this afternoon he’s got to fly out to Russia to have some medical tests. He’s got to be back here for training on Monday.

"The bad news is the fact that he’s got Russian flu. The good news is that he’s going to fly to Russia to see his brother play for England in the quarter-finals of the World Cup.

"He’s absolutely thrilled and he’s sorted it out with his family that he’s going. It’s great for our club that one of our players is going to be watching England play.