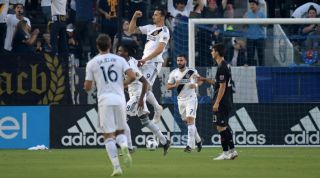 In the fifth minute, the 36-year-old striker latched onto a David Romney cross and smashed home to join a list of only 28 players in history who have scored over 500 goals, according to the Rec.Sport.Soccer Statistics Foundation (RSSSF).

Zlatan will now be chasing the record to become Sweden's highest all-time goalscorer, with Milan legend Gunnar Nordahl ranking ahead of him on 513 goals.

Legendary Czech striker Josef Bican is top of the list with 805 goals to his name, though, so even the self-proclaimed 'god' might struggle to hit that figure in his advancing years. Get on with it, Zlatan.