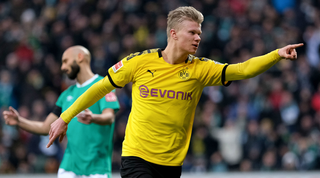 Erling Braut Haaland has revealed Borussia Dortmund bosses showed him videos of the club’s fans to help convince him to sign for them in January.

Haaland joined Dortmund from RB Salzburg for a £17m fee over the winter break after discussing his next move with his father, the former Leeds and Manchester City midfielder Alf Inge Haaland, and his agent, Minot Raiola. The trio decided Dortmund’s record of developing young stars, such as Jadon Sancho and Ousmane Dembele, made it the perfect next step in his career. But a video of Dortmund’s famous ‘Yellow Wall’ helped to confirm his decision.

“I’d seen it before, of course, but they showed me – all the fans are amazing here,” he told the April issue of FourFourTwo, available from Thursday, March 5. “I had a very good feeling about Dortmund from the first moment, and that’s why I’m here. I liked the whole club, the history, the people in the club and how they run it. We decided Dortmund was the best option. And it is.”

The Norwegian teenager was not short of offers over the winter transfer window, with a host of super clubs across Europe desperate to land the striker.

It appears he made the right decision, however, having already scored 12 goals in eight appearances, including both goals as Dortmund recorded a 2-1 win over PSG in the first leg of the Champions League last-16.

Among those rumoured to have been keen to land the 19 year old were Manchester United, whose manager, Ole Gunnar Solskjaer, knew Haaland from his spell in charge of Norwegian club Molde. Haaland remains tight-lipped on the saga, however.

“I don’t talk about that; I can talk about me and my club,” he says firmly, while admitting he was flattered by their interest: “It’s always nice when clubs are interested. It means you’ve done something right.”

Read the full interview with Erling Braut Haaland in the April 2020 issue of FourFourTwo magazine, out in shops and available digitally from Thursday March 5. Our new magazine reveals the stars of the decade – the 50 wonderkids who'll rule the next 10 years, with an exclusive interview with Marcus Rashford, Vinicius Jr, Gabriel Martinelli, Ruben Neves, and Reece and Lauren James – as well as profiles of Trent Alexander-Arnold and Kylian Mbappe. We also chat to Steve Clarke and Mick McCarthy and Scotland and Ireland in the Euro 2020 playoffs, revisit the last time Liverpool won the league, and chat to Nobby Solano, Yakubu and Wes Brown about their careers.