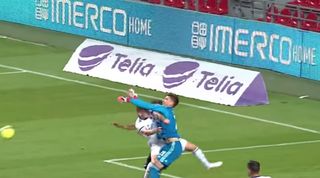 The 26-year-old Finnish goalkeeper started his senior career at Fulham and enjoyed loan spells at a host of lower-league English clubs including Accrington Stanley, Cambridge and Maidenhead United.

But it's been some rise since for Joronen, who completed a €875,000 move to prestigious Superliga club Copenhagen this summer after impressing for league rivals Horsens.

On Thursday night, Joronen got his first taste of European football – and certainly had a debut to remember. In the 88th minute, with Copenhagen seeing out a 1-1 draw at Telia Parken (2-1 on aggregate), he clattered into his own team-mate Denis Vavro and lost two teeth.

But, being the tough guy he evidently is, Joronen played on regardless.

"I lost a couple of teeth, but I'm going to the dentist and it will be fine," the Finn told Copenhagen Sundays.

Joronen's name may have already rung a bell: he once scored for Stevenage against Wycombe in October 2015 (below).

Photographer squashed by Mario Mandzukic & Co. given free holiday by Croatia's tourist board