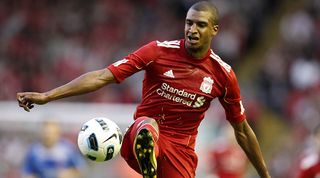 Back in 2011, Coyle signed N'Gog for Bolton from Liverpool for £4m.

Seven years later, the Scot has brought his man to Scotland on a free transfer after the Frenchman recently left Greek Superleague outfit Panionios. Before that he was at Reims for two years, after a fruitless spell with Swansea.

N'Gog will be best remembered by Liverpool fans as a regular substitute who played in most of their Europa League clashes.

Now aged 28, N'Gog is looking to revive his nomadic career in Scotland and Coyle is proud to secure his services again.

"Having worked with him before at Bolton, I am all too familiar with his qualities and I think he will be an excellent addition to our attacking options."

Ross County are bottom of the Scottish Premiership table in 12th.