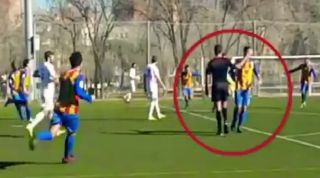 The Tercera Division club beat Alcobendas Sport 2-1 on Sunday to record their first win since October 12 – but the decisive goal was marred by controversy.

The referee had a tough decision to make as a Los Yebenes strike was clawed away by the Alcobendas goalkeeper – but the ball appeared to cross the line, so he awarded Los Yebenes their second goal at the Estadio Eustasio Casallo in Madrid.

Los Yebenes players frantically celebrated and one high-fived the referee, who looked rather nonplussed by the act.

Is he taking tips off Mike Dean?

Cristiano Ronaldo checks out his facial injury on a mobile phone