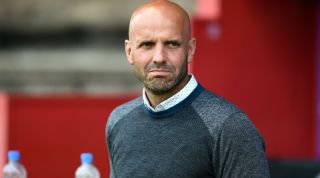 With the match nearing its conclusion, on-loan West Brom teenager Wilson was awarded a second yellow card after kicking the ball away to stop opponents Mansfield from mounting a late counter-attack.

Wilson had already been given a "dubious" - in his manager's words - booking earlier in the game, and was sent for an early shower when desperately trying to delay play.

Rather than bemoaning the sending off, though, Tisdale backed the referee over his decision but called for greater consistency throughout the division.

"It's nice to stand here and say he got sent off for the right thing," said Tisdale. "Every single week I go on to fourth officials and referees to book people for kicking the ball away.

"What I'd ask referees to do is do it all the time – if it's the first minute or the last minute, do it. The ball should be in play, it should be moving and the referees have got to be stronger. So well done the referee for giving a yellow card.

"I'm really sorry for Kane that he's already been yellow-carded, he's got to learn from that, but would referees please do that in the first minute as well as the last minute."

Exeter held on for a 1-1 draw but are now three points behind leaders Notts County in League Two.