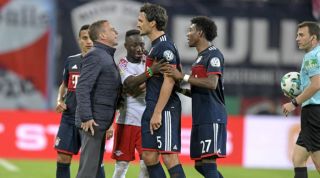 Leipzig's sporting director was fuming his side had not been awarded a penalty against Bayern Munich in the first half of their German Cup second round tie on Wednesday night, with referee Felix Zwayer awarding the hosts a free-kick instead.

Juventus's Federico Bernardeschi smacks in tasty volley in Serie A

Rangnick went to approach Zwayer, with mobile in hand, on the pitch when the whistle blew for half-time. But before the 59-year-old could get to the referee, he got into a heated exchange with Mats Hummels before Naby Keita had to separate the pair.

However, the bitterness continued into the second half as the Liverpool-bound Keita was sent off after picking up a second yellow card.

The fiery contest finished 1-1 and Bayern emerged victorious on penalties. TV replays showed the referee was correct in awarding Leipzig a free-kick and not a penalty, which will surely have only embarrassed Rangnick further.

He said after the game: "You can't do that. It could lead to the ref thinking that he's not acting cool."

However, Hasenhuttl did accuse Zwayer of having "double standards" so nobody from the Leipzig camp was in a particularly good mood.