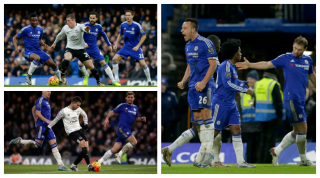 Roberto Martinez’s Everton let go of yet another lead – twice, in fact – and Chelsea extended their unbeaten run under Guus Hiddink to seven matches thanks to John Terry’s last-gasp equaliser (the latest scored in a Premier League match since 2011, coming after 97 minutes and 53 seconds), but that’s only part of the story. There was plenty more to digest…

1. Fabregas still has plenty to offer

Cesc Fabregas’ decline has been as great as it is surprising in the past 12 months, after he made a scintillating start to life back in London. Played in a deeper position by Jose Mourinho, the Spaniard never truly convinced defensively but compensated by delivering assist after assist for several months before entering a year-long fallow period. His reputation has crashed through the floor.

Yet, pushed forward into a No.10 role once again by Hiddink, Fabregas showed he still has what it takes to decide games (when he fancies it). Tidy but not outstanding in the first half, he burst into life in the second, releasing Diego Costa with a long pass for Chelsea’s Anschlusstreffer, then scoring the equaliser not two minutes later with a heavily deflected effort.

Across 90 minutes, Fabregas made the most passes (and the most attacking-third passes, by some distance), had the most shots and created the most chances of any player, also forcing a fine save from Tim Howard with an inspired lobbed backheel volley, hit first time. Hiddink’s decision to start both Nemanja Matic and John Obi Mikel most likely stemmed from wanting to restrict space into which Ross Barkley could run, but it put Fabregas in a creative mood once again – and he even remembered how to tackle.

Was taking only a point from this match just ‘classic Everton’? Yes and no. Again, they showed defensive and psychological frailty to only draw after leading 2-0 and 3-2, but as Roberto Martinez lamented, they were deeply unlucky in this instance: Chelsea’s first equaliser was the result of a huge deflection, and more controversially, their second equaliser came nearly a minute after all the stoppage time appeared to have been played and courtesy of an extremely offside John Terry. Martinez was unsurprisingly furious at full-time.

Even so, Everton’s performance carried all the traits of a typical Martinez side, and of their season thus far. Across an excellent 15-minute spell after half-time they took a 2-0 lead and also hit the post through Barkley, playing with verve and invention through Barkley, Kevin Mirallas, Leighton Baines and Romelu Lukaku.

But almost immediately after extending their lead, Everton allowed a suddenly revived Chelsea to mount attack after attack – and almost inevitably, they were pegged back by Diego Costa exploiting a defensive mix-up involving Tim Howard and Phil Jagielka, even if both had impressed up to that point.

Having had one shot in the whole of the first hour (a Willian effort well saved by Howard), Chelsea had six shots in six minutes, and got back on level terms.

It would be wrong to really put the boot into Everton following a draw at Stamford Bridge, but their soft underbelly is a concern for many Toffees fans. And oddly, one reason might be that they don’t commit enough fouls.

Now, fouls are bad things. You may have heard this. But they also break up play, show a refusal to allow the opposition to dictate proceedings and, if you’re of a certain generation, let the other team know ‘they are in a game’. Everton have conceded the fewest fouls in the Premier League this season, and when that’s combined with the second-fewest interceptions, it’s hard to ignore the conclusion that they don’t mind letting their opponents play. That’s why, in this match, Chelsea – while deserving of credit for getting their act in gear after going 2-0 down – found it so easy to get back into the game.

Willian in particular was shown too much respect, and completed seven of his eight dribbles. In the whole match – all 99 minutes of it – Everton made only five fouls. They also failed with 42% of their attempted tackles. While the above screen illustrates how they were sensible not to transgress around their own box due to Willian’s free-kick prowess, there were few of the niggly fouls that characterise a team protecting a lead in the dying minutes.

Roberto Martinez even indicated in the post-match press conference that he and his young players don’t like to play the clock down. That is naïve in the extreme.

Chelsea having 55% of the ball against possession-loving Everton, completing an almost-ridiculous 87% of their passes and hitting only 6% of their passes long would possibly bring Jose Mourinho out in hives. And that’s before you consider that they conceded what could or even should have been a stoppage-time equaliser because Romelu Lukaku and Ramiro Funes Mori were left unmarked at the far post (Funes Mori took the ball off the Belgian’s foot to score).

It’s true that the home side benefited from being direct in the manner of their first goal, Fabregas spotting Diego Costa’s run and the striker outmuscling Jagielka. On the whole, however, they played a short passing game, were proactive and showed patience in possession, while also showing the grit required to find a fortuitous second equaliser. Who says a caretaker manager can’t impose his own style on a team?

There’s no surprise that the Toffees look stronger down their left side again now that Baines is fit. The 31-year-old created both of Everton’s first two goals, first with a driving low cross that forced John Terry to juggle the ball into his own net, then with a precise inside pass to Kevin Mirallas, who finished brilliantly to make the score 2-0.

Playing primarily in front of Baines, Mirallas had a superb game, and had he converted a wonderful one-on-one opportunity at 2-2, he would have been a deserving man of the match.

But just as Baines brings life to their left flank, Everton’s right-hand side relies wholly on Seamus Coleman being available. The left-footed Bryan Oviedo, playing out of position, put in an indifferent display before being replaced through injury by goalscorer Funes Mori, and Aaron Lennon was virtually anonymous, even if his dashboard looks commendably tidy.

Some people are wondering why Martinez is chasing Sam Byram when he already has a perfectly good right-back. This is why.

Analyse Chelsea vs Everton yourself with Stats Zone