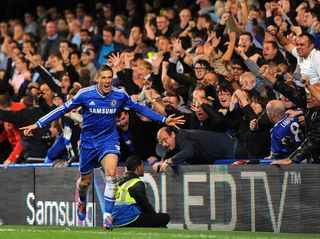 1) Fernando Torres is back (sort of)

Every now and again we see a flicker of the old Fernando Torres and this invariably prompts the question: “Is he back?”

Unfortunately it usually proves to be nothing more than just a flash. FFT doesn’t want to speak too soon, but his performance against City did more than just stir. He had the City defence rattled.

Like the Torres of old he was direct, positive and aggressive – squaring up to defenders and taking them on. He tried more take-ons than any other players – eight – and was successful with three of them. He was the most fouled player on the pitch and he went up for five headers, winning three of the challenges. Only Gary Cahill had as good a record.

Ok, he did miss some chances, but he turned on the afterburners to skin Gael Clichy and set up Andre Schurrle for the opening goal and he scored the late winner, capitalising on a mix up between Joe Hart and Matija Nastasic.

2) City can't keep the ball when it matters

City had 54% of the possession, but their passing in the final third let them down. They attempted 478 passes to Chelsea’s 396 and recorded an 84% success rate.

Of those passes, 185 were in the home side’s territory, but only 134 found the feet of a team-mate. Jose Mourinho’s team saw less of the ball, tried fewer passes at the business end of the pitch, but their success rate behind enemy lines was superior.

Fernandinho was particularly wasteful – just 63% of his passes in the attacking third found their target.

They’re both 32, but you wouldn’t think it. The Chelsea captain’s career at Stamford Bridge looked to be heading towards a sad end, but he’s rediscovered his sharpness under Mourinho.

Rather than looking slow and immobile, he’s breathing defiance at the heart of the defence. Terry topped the charts for interceptions (3) and clearances (7) and he won his two aerial duels.

Cole was just as sturdy. He won all eight of his tackles – the most made by any player on the day. When he wasn’t dispossessing an opponent he was keeping possession – completing 34 of his 36 passes. He was especially accurate in the attacking third, picking out a team-mate with all 13 of his attempts.

4) Aguero comes alive in the box

As well as Chelsea’s defence played, they couldn’t silence the explosive Argentinian. He might only be 5ft 8in, but he’s like a tank, running over all who dare to get in his way.

Aguero's physicality unsettles defenders and he strikes like a viper when in the box. Before his marker can get close enough to put in a challenge he’s sent a thunderbolt hurtling towards goal.

His shoot-on-sight policy saw him take more shots on goal than any other player (6), including the one he lashed past Petr Cech to level the scores. He hit the target with three other efforts, had one blocked and flashed another one wide of the post.

Too many times City’s players were blown away by the men in Blue. The visitors threw themselves into 38 tackles, but only 22 were successful – that’s just 57%.

Chelsea had four of the top five dribblers in the game in Branislav Ivanovic, Ramires, Torres and Eden Hazard. They also had three of the most fouled players – with Torres, Hazard and Ramires taking the brunt of the punishment. They couldn’t get close to them - and paid for it.