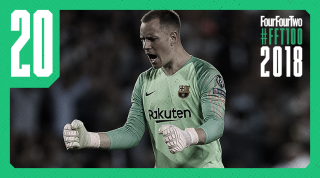 If it was possible to design the perfect Barcelona keeper in a laboratory, the end result would probably be Ter Stegen.

A brilliant shot-stopper and exceptional passer of the ball, he performs his duties at the Camp Nou exceptionally week after week. The German rarely makes mistakes that characterised his earlier career, despite the error-prone nature of keeping goal for a team that defends terrifyingly high up the pitch. That takes nerves of steel.

Ter Stegen is still only 26 and could yet have a decade of improvement ahead. Really, he should have been Germany’s goalkeeper at the World Cup – without doubt on the basis of form – but Joachim Löw stuck with the returning Manuel Neuer instead. But the Bayern Munich net-minder’s place is under serious threat now – all because of Ter Stegen.

Ludicrous as it may sound now, though, he was considered something of a gamble as recently as 2016. Claudio Bravo had just won back-to-back Ligas – with Ter Stegen as Barça’s ‘cup’ keeper, including the 2015 Champions League triumph – but the Chilean was allowed to join Manchester City. Someone on the Camp Nou staff knew what they were doing.

It’s not often that a keeper is worth the price of admission, but focusing solely on the Germany international during Barça games is an entertaining match in itself. He isn’t just good with his feet for a goalkeeper, he’s good with his feet full stop.

Dinked passes over onrushing attackers, perfectly placed diagonals to Jordi Alba near the halfway line and quick one-twos with his centre-backs are staples of The Ter Stegen Show. He has a reputation for being particularly good in the rondos at the club’s training ground, and you can see why.

But to talk solely about what he does in possession of the ball would be a disservice to how good he is at stopping it. Agile with strong hands, it’s not uncommon to see him bail Barcelona out with a brilliant stop, spring back to life and save the follow-up. Los Cules’ home win against Sevilla in October was a case in point, when Andre Silva and Franco Vazquez were left in disbelief at their adversary’s heroics.

If they look after him well, Barcelona have a keeper that will win them trophies for years to come.