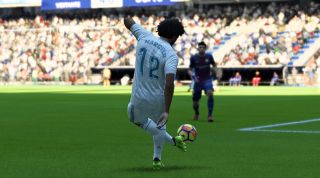 Your ability to master a skill move in FIFA can be the difference between winning and losing. Whether it’s a simple fake shot or a perfectly timed rabona, these manoeuvres are sure to leave opposition defences bamboozled.

As usual, EA Sports have thrown some new tricks into the mix this year, while also enhancing some pre-existing ones. We’ve detailed them below, so get learning now and we guarantee your game will improve massively as a result.

How to do it: Press B then A (Xbox)/Circle then X (PS4) and flick right stick in opposite direction to where player is facing

If you opt to learn just one new FIFA skill this year, make it this one. The Cruyff Turn can be performed by any player in the game, and if used effectively will leave both online and AI opponents highly susceptible to its defence-splitting nature.

How to do it: Flick right stick in direction player is facing while running

How to do it: Hold LB/L1; flick right stick up and then left or right

El Tornado is special in that it can only be performed by a select few players in FIFA 18; Cristiano Ronaldo, Antoine Griezmann and Roberto Carlos among them. The trick is so exclusive that it isn’t even credited as an official skill move in-game, but EA have said they’ll unlock it for any player who pulls it off in real life. Crouchy, the floor is yours.

How to do it: Hold RB/R1 and use left stick to feint. Release RB/R1 to burst away.

Slight alterations have been made to the No Touch Dribbling system in this year’s game. Now, the RB/R1 button(s) serve as your modifier, allowing you to deceive opponents before leaving them in the dust with a quick burst of speed.

How to do it: Hold RT/R2 and flick right stick towards opponent

The Bridge returns in FIFA 18 after a short absence, and unlike most of the skills on this list, it can be performed by any player in-game. Take some time to familiarise yourself with the positioning and timing required to carry it out successfully.

How to do it: Flick right stick back and then left or right

This is a four-star skill move that can be performed in one of two ways. There are no modifiers required to carry it out, so all you need to do is flick the right stick back and then left or right depending on your chosen direction.

How to do it: Automated – no input necessary

Players like Neymar, Marcelo and Ronaldinho can all control long passes with their heel in FIFA 18, resulting in a beautiful-looking animation. The best part? The move is completely automated, requiring you to do nothing but bask in its glory.

The 5 best formations in FIFA 18: our favourite systems explained