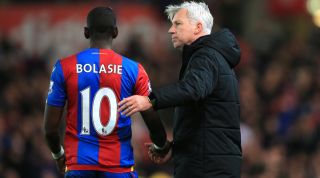 It's very difficult to see Crystal Palace getting anything from this match. They've failed to score in any of their past five league matches and their defence is in chaos; the fluidity of Spurs’ attacks will surely be too much for Alan Pardew’s team, and Damien Delaney in particular.

Palace’s striking problems have been a growing concern all season. They've only scored more than once in a game eight times this season, hitting three or more just twice. In fact, without the bizarre and anomalous 5-1 victory over Newcastle in November they would have the same goalscoring record as Aston Villa.

But the primary reason for their worsening record is Yannick Bolasie’s absence – which coincides exactly with their 460 minute dry spell. Palace rely on counter-attacking down the wings to score goals after absorbing pressure for long periods of the match: 77% of their attacks come down the wings (league highest) and 48% of their goals are from set-pieces, often from fouls earned by those tricky wingers bursting into space (Dwight Gayle and Wilfried Zaha are fouled five times per match between them).

This model is suddenly nullified without Bolasie, whose powerful dribbling and strength in possession lays the foundation for counters; without him to hold up the ball after receiving long passes, Palace get stuck in their own half. Bolasie is in contention to play some part on Saturday, but until he regains full fitness these problems will continue. Tottenham, who boast the best defensive record in the Premier League, will be confident of keeping a clean sheet.

Spurs are scoring freely thanks largely to the versatility of Mousa Dembele, Dele Alli, Christian Eriksen and Erik Lamela, all of whom swap positions frequently and exploit the spaces created by those long diagonals out from the back. They tend to tear through most teams these days, but Palace are a particularly vulnerable target right now.

Damien Delaney has made a total of just three tackles and two interceptions across the last three games. He was directly at fault for two of Chelsea’s goals a fortnight ago and again for Manchester City’s third goal last Saturday (not to mention Sunderland's winner at Selhurst earlier in the campaign). He frequently chases the ball at inappropriate moments, creating confusion in his absence as Palace defenders scramble across to cover. Harry Kane will be optimistic of bagging a goal or two at Selhurst Park.