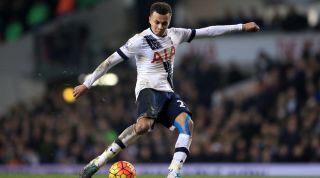 The tactical pattern of this match will be relatively simple to follow. Sunderland are becoming a proper Big Sam team complete with long ball hoofs and head tennis, while Tottenham have added great variety to their possession-centric game; Spurs hold the third highest possession average in the league (54.5%), and Sunderland have the lowest (41%).

The key battle will be between Sunderland’s central defenders – slow, immobile, and rarely comfortable against high tempo teams like Spurs – and Dele Alli’s runs from deep. Tottenham will dominate the ball throughout as Sunderland launch long clearances towards Jermain Defoe, and whist Allardyce will be confident his team can, in a deep shell, clear anything that enters the box, Alli’s runs could make the difference.

The chances created by Liverpool and Man City in recent matches (below) give some indication of the haphazard defending this centre-back pairing are capable of; it is easy to imagine Alli strolling through the centre as Kevin de Bruyne did last month.

Tottenham’s confidence will come from their ability to stretch deep defensive shells wide before piercing through the centre. Kyle Walker and Ben Davies are crucial components of Mauricio Pochettino’s formation; they hug the touchline high up the pitch, ready to receive long diagonal passes that force the opposition to move out of their compact shape. It is this tactical move that will create opportunities for Alli, Erik Lamela, and Harry Kane more centrally.

The variety that Spurs have added to their game this season has made them unpredictable to defend against and ruthless in exploiting sluggish centre-backs. Given the difference in quality and recent form, it is difficult to see anything other than a comfortable win for the home side at White Hart Lane.