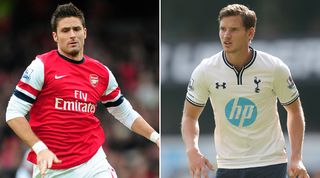 Arsenal silenced their critics yet again, rolling to comfortable victories over Fulham and Fenerbahce. There’s no doubt that reports of their demise were always greatly exaggerated, but there’s nothing like two wins in four days – sparked by an improving Aaron Ramsey – to stop the mutterings, even if their squad does look rather familiar.

Tottenham are much changed from last year. However, they're still more chrysalis than butterfly at the moment. The arrivals of Paulinho and Etienne Capoue have yielded enviable solidity in midfield, but at the expense of threats going forward. Paulinho showed a willingness to get forward against Swansea while Mousa Dembele and Capoue each pinged off a couple of shots, but all three offer more in terms of physicality than firepower.

Further forward, Nacer Chadli has yet to strongly imply he can carry over his impressive goal tally for Twente, while Andros Townsend and Aaron Lennon’s strengths lie in other areas. Roberto Soldado can’t be expected to score all of Tottenham’s goals, and certainly not from the spot.

The imminently incoming Erik Lamela could change that – he averaged a goal every other game for Roma last term – and Spurs would be delighted with a third consecutive 1-0 win here. But another clean sheet looks like an uphill task: Olivier Giroud, like Ramsey, has grown in confidence, while Theo Walcott is likely to cause Danny Rose problems and Santi Cazorla is one of the Premier League’s most talented creators.

Gunners fans who vocally demanded Arsene Wenger “spend some f***ing money” will have had their wrath cooled by Champions League progression, but their ire could rise again upon seeing Arsenal’s substitutes bench for this derby. The Gunners had five under-21s in waiting against Fulham, including 16-year-old Gedion Zelalem, and they’ve picked up another injury since.

The hamstrung Lukas Podolski climbs aboard a crowded treatment table already occupied by Mikel Arteta (thigh), Alex Oxlade-Chamberlain (knee), Thomas Vermaelen (back) and Abou Diaby (general Diaby-ness). There are concerns over a groin strain and an ankle knack to Ramsey and Jack Wilshere respectively, but Wenger expects both to feature.

Tottenham have no such worries: Lennon is the only doubt, with a foot injury.

Cazorla is Arsenal’s creative hub, so often central to attacks, but he faces a wall on Sunday. Capoue made six out of an attempted seven tackles against Swansea and recorded a match-high six interceptions against Crystal Palace despite playing little over half an hour.

With the Tottenham man athletic enough to track the quick-footed Cazorla’s runs (and despite creating six chances, the Spaniard completed only two of five attempted take-ons against Fulham), Arsenal’s playmaker may need to pass around him instead. It’s vital to Spurs that Capoue intercepts those through-balls: neutralising Cazorla would be the first battle won.

Two world-wearier managers you are unlikely to find. Andre Villas-Boas has been bombarded with Bale questions, while Wenger is so tired of transfer talk that he sighed, “I don’t know what to say any more.”

Maybe, despite their clubs’ market situations being worlds apart – Spurs have spent £90m so far this summer, Arsenal nothing to date – Wenger and Villas-Boas can sympathise with each other that things would be much easier if the window was closed already.

This fixture usually sees goals aplenty, but as both teams settle into the season, a low-scoring draw looks more probable. 1-1.