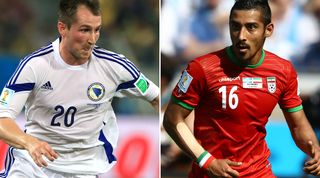 These two relative minnows of the international game can look back on their 2014 World Cup campaigns so far with some pride and some frustration.

For Bosnia and Herzegovina, the cliche runs that just making it to the finals is enough to leave them satisfied, and while the debutants should certainly be proud of the fact that they’re now mixing it with the big boys, they will be unhappy in retrospect to go into the final game with no chance of making it to the round of 16.

Edin Dzeko & Co. had a reasonable pop at an underpowered Argentina side at the Maracana, with the local fans enjoying themselves as Miralem Pjanic occasionally opened up the Albiceleste rearguard. Vedad Ibisevic’s goal, his country’s first at a World Cup, was a moment to savour, but the Europeans were ultimately undone by a flash of Lionel Messi majesty.

Their loss to Nigeria was harder to tolerate: a perfectly valid Dzeko goal was deemed offside (the big forward later dubbed the referee “shameful”), and although the African outfit generally looked sharper over 90 minutes, coach Safet Susic has every right to feel irked that they’re now just playing for pride. Pride, however, isn’t in short supply in this side, and we’ve got a feeling that the Dragons will be back at this level. For now, winning that first World Cup game is on the agenda.

The Bosnians would do well to talk to Iranians about how tricky that can be. Team Melli have been to three finals (1978, 1998, 2006) and won just one match (famously defeating USA at France 98), never making it out of their group.

They’re yet to win one here, too: Carlos Queiroz’s men adopted a conservative approach against Nigeria, sitting back and hoping to frustrate the Super Eagles and score on the counter. It almost worked, and more of the same was anticipated against Argentina. But in an extraordinary fixture, the defensively stout Middle East outfit denied one of the best attacks in football for 90 minutes, almost plundering a winner themselves on a number of occasions and having a decent penalty shout turned down. Messi was again the ultimate difference, curling in a heartbreakingly brilliant effort in the 91st minute.

Iran must now therefore do something that doesn’t come naturally: go for it. They must also pray that the real Argentina wake up and pummel Nigeria: a two-goal swing in goal difference is required to bring goals scored into the equation and potentially put Iran through ahead of the Africans. It should be tactically interesting: Bosnia and Iran have scored just once between them in four matches so far, and it remains unclear if Queiroz has a Plan B that can turn a well-drilled outfit into goal-happy match winners. If he does, he’ll never have to buy himself a non-alcoholic drink in Persia again.

“Argentina + the referee 1, Iran 0. Argentina won because of the referee. Iran was a victim of injustice.” - Jaam-e Jam, Tehran.

“Susic believes that players should be committed, and give their all against Iran. But he also honestly adds that it will not be easy to motivate the players after their defeat, especially in a match that does not have much significance.” - Sarajevo Times.

Never mind the relegation – what a World Cup for Fulham so far. First Bryan Ruiz eliminates England with his Costa Rican antics, then Ashkan Dejagah almost outshines Messi and Argentina – having a strong penalty claim rejected, sending in some great free-kicks, and being thwarted by a goalkeeper’s fingertip with a thunderous header that looked destined to give Iran the win. We’re fully expecting the Cottagers’ Giorgios Karagounis to get Greece out of Group C at this rate...

Dejagah has looked a real livewire for a Team Melli side short on offensive outlets, but he’ll be up against the Dragons’ best defensive weapon: Stoke City goalkeeper Begovic. The supreme shot-stopper – nicknamed the ‘Minister for Defence’ in the Bosnian media – has already fallen victim to some Potter-on-Potter unfriendly fire, conceding a goal to Stoke team-mate Peter Odemwingie in the Nigeria match, and will be determined to bag his first World Cup clean sheet. The result of their battle could resolve whether Nigeria or Iran qualify for a (most likely) round of 16 meet with France.