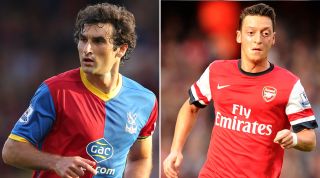 After Monday’s 4-1 capitulation to Fulham at home it was only a matter of time. Two days later it happened. After less than a year in charge Ian Holloway left his position as manager of Crystal Palace by mutual consent.

When the dust settled and caretaker boss Keith Millen sat down to take stock of the side’s current plight, the last team he would have wanted to see on the fixture list is Arsenal (although he probably knew that bit before, we'd hope).

Unfortunately, the merciless league schedule has afforded the South Londoners no respite from their nightmare. Second from bottom with three points from eight games, the Eagles welcome the leaders to Selhurst Park on Saturday. Palace have conceded 17 goals in eight games – the second worst defensive record in the league. Arsenal have found the net 18 times – only Manchester City have scored more.

If that wasn’t enough to leave the Palace defenders quaking in their boots, the Gunners arrive in South London with a point to prove. The critics have been quick to jump on Arsenal after their midweek reality check against Borussia Dortmund. Arsene Wenger’s side lost 2-1 to the Germans at the Emirates in the Champions League on Tuesday, prompting suggestions their early-season success owed much to a generous fixture list, rather than genuine title-winning credentials.

An even-handed analysis will have observed that while their start has been impressive, it’s too early to say they’d convert their form into trophies. Dortmund are the best side Arsenal have played by a distance and there’s no shame in losing to last year’s runners-up. The Gunners were undone by a clinical Robert Lewandowski, who coolly finished a high-speed counter-attack. It could have quite easily been a draw – a fairer result on the reflection of play.

One result doesn’t define a season. What will give a indication of whether Arsenal are serious contenders is how they respond.

Jack Wilshere is a doubt after he hurt his ankle in a challenge with Dortmund goalkeeper Roman Weidenfeller. The midfielder tried to battle through, but Wenger withdrew him in the second half as he struggled to keep up.

Luckily for the Gunners, but sadly for Palace, they have a ready-made replacement in Santi Cazorla.

Wenger will be hoping to have French destroyer Mathieu Flamini back in the squad, after he missed Tuesday’s game with concussion following clash of heads with Norwich’s Alexander Tettey.

As Palace’s holding midfielder, Mile Jedinak has got a hell of a job on his hands this weekend. With Wilshere likely to miss out through injury, he’ll just have to stop Tomas Rosicky, Santi Cazorla and Arsenal’s new lord of ball-mastery, Mesut Ozil.

If he’s on the look out for some tricks of the trade, he need look no further than the Dortmund game. The take home message: press, press and press some more. There was a point in the first half where the Germans had covered 4km more than the Arsenal players. The visitors swarmed on Ozil in possession, diluting his influence, but not completely extinguishing it – he still created three goalscoring opportunities and made more passes in the attacking third than any other player.

In a team that shipped four goals against Fulham, Jedinak was Palace’s most impressive defensive performer. The Australian topped the charts for ball recoveries (10) and interceptions (6) and was successful with all four of his tackles. Jedinak isn’t Rambo – he won’t be able to single-handedly take down Arsenal’s invading troops and will need his team-mates to do their bit – but he clearly has the combative tools to provide protection.

Wenger said his players looked jaded during the Dortmund game and highlighted their naivety in conceding the winner. A fair assessment.

But as much as the Frenchman would like to rotate he can’t, because he just doesn’t have enough fully fit personnel. But what he can demand from his players is a mature response. He knows they can’t afford to let one result have a ripple effect on their season.

On the one hand, facing a club in disarray is just what they need, but on the other they’ll be coming up against a set of players with a point to prove. With the fear of a new manager lighting a fire up their backsides, you would expect the Palace players to come out fighting for their futures.

They certainly need to do everything they can to impress their prospective new boss, because current form won’t glean any favour – they’ve lost five on the bounce. Even if Millen wins this game he’s not going to get the job, but a victory here could mark a turning point in the club’s fortunes.

Another three points for Arsenal, another miserable afternoon for Palace: 3-0 to the Gunners.