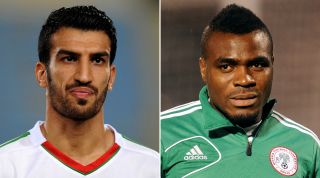 The Princes of Persia against The Super Eagles (though Iran are more commonly referred to as Team Melli, meaning The National Team, but that's a terrible nickname).

Returning for the first time since the 2006 World Cup, Iran's hopes of springing a surprise by qualifying second behind group winners Argentina were hit hard by economic sanctions that put paid to the team preparing for these finals overseas.

No major international opponents were willing to play Carlos Queiroz's side for fear of having political sanctions imposed on them as a result, so Iran have had to make do with sharpening up against Belarus, Montenegro and Angola in the run up to these finals, and that may not fully prepare them for facing Messi, Aguero & Co.

On the flip side, Iran have been preparing for the finals since April, when their domestic season ended early, so they should at least be united. But the fact they rely on the goals of a striker plying his trade with Charlton (Reza Ghoochannejhad) is on the flip side of that flip side, and it illustrates the gulf in class Iran are likely to encounter.

No team at these finals has endured as many winless World Cup games as Nigeria (eight and counting, two draws and six defeats), but the Super Eagles will be confident of erasing that sorry stat in a group they're very confident of escaping. Bereft of true world-class dangermen but blessed with a quick, youthful, energetic squad, the reigning African champions will expect to hit the ground running against Iran. As indeed do we.

Iran harbour hopes of escaping the group, with this opening game deemed crucial. But, according to Arman Daily, a paper not a person, "luck may play a bigger part than skill". For Nigeria, anything less than the quarter-finals will be deemed an epic fail. "This team will surprise a lot of people and they can go further than any African side have ever gone," claim SuperSport. Which means, we deduce, the semi-finals.

The Fenerbahce striker has survived an alleged match-fixing rap in Turkey and serious injury at last year's Nations Cup to remain Nigeria's most likely source of goals – he poses a threat from close quarters and at distance as the front-man in a 4-3-3. Jalal Hosseini and Pejman Montazeri are likely to line up in central defence, tasked with harshing Emenike's buzz. If they fail, likely custodian Daniel (he was born in Germany and doesn't speak much Farsi) Davari will become Iran's MVP.