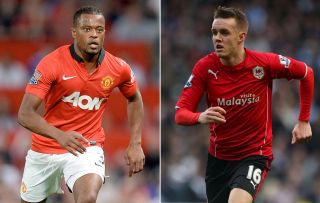 The Solskjaer Derby. Not that? OK, United are rubbish at penalties? Or that, huh? Juan Mata joined Man United?! Behave, like that would ever happen. Oh…

So, the Special One couldn’t/wouldn’t find a way to get the Special Juan into his XI and has sent him to the land of red bricks, Lowry and the Stone Roses.

For all the things wrong with Man United this season, and there’s plenty of them, the lack of a genuine No.10 wasn’t really one of them. Wayne Rooney, when fit, has enjoyed one of his most productive campaigns in years – bringing him potential captaincy rights, better pay and a consultancy in future transfers should he sign a new contract – while Shinji Kagawa has never really been given a fair crack at his favoured position behind a striker.

David Moyes still needs a consistent midfield partner for Michael Carrick (whose own injury troubles are causing growing alarm) and, assuming the rumours of Patrice Evra’s impending exit are accurate, a left-back, but the mental lift the arrival of a player with such undoubted quality provides could prove incalculable. Already, the talk is of Champions League football, despite United’s miserable League Cup exit to Sunderland.

Rooney and Robin van Persie have both trained since the Black Cats debacle and any team containing those two, plus Mata and the improving Adnan Januzaj, has the raw talent to compete. It needs Moyes to pull it all together.

As for Cardiff, a worrying trend is increasingly being established. The Bluebirds have scored only five first-half goals all season, and only Palace have netted fewer than the Welsh side’s meagre total of 17.

Fraizer Campell is the club’s top scorer with a paltry five, but all bar one have come against Manchester sides, so expect the former Red Devil to start against his former club.

Their last league win came against West Brom, and even the replacement of Malky Mackay with Ole Gunnar Solskjaer hasn’t brought an end to a run of five defeats in six games since that mid-December victory.

Returning to the club where he won 13 major honours as a player and a handful of trophies as reserve team boss, the Norwegian must hope his signings – remember Mackay was effectively sacked for asking for three – inject some life into an increasingly flagging season.

So often an unhappy venue for ex-United stars – see Mark Hughes, Steve Bruce, Bryan Robson and more – Solskjaer’s first league win may yet have to wait a little while longer.

Carrick will be out for around a month, while Rio Ferdinand should be nearer to a weekend return. Rooney, Van Persie and Marouane Fellaini are all expected to play some part from respective pelvis, thigh and wrist injuries. Long-term injured Andrew Taylor is Cardiff’s only absentee.

Cardiff’s principal threat in recent weeks has been Noone’s erratic wing play. The Scouser may not be the most consistent of performers, but his drive and directness cutting inside from the left wing causes danger. Coming up against Evra, about whom Moyes clearly isn’t keen, the former roofer has the trickery and quick feet to challenge a 32-year-old whose manager believes to be on the wane.

Moyes must hope United’s recent trend of conceding more possession to teams visiting Old Trafford stops. Still to find the system and rhythm that gets the best from his squad, United are visibly more assured away from the pressure cooker of home games.

Solskjaer’s first visit to Old Trafford’s opposition dugout as manager will be emotional, but the Norwegian must eschew sentiment for an improved performance and, ideally, a result. Those who remember his days as the Baby-Faced Assassin are feeling pretty old, about now.

The merest threat of Mata should be enough, but not without a fright first. 2-1.