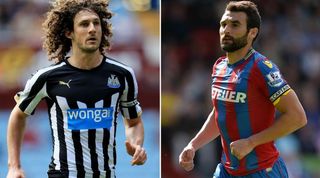 Pardew vs Warnock - like Alien vs Predator in bad tracksuits.

Mothers, lock up your fourth officials, Neil Warnock is back in town.

On the face of it, the appointment of the former Notts County, Sheffield United, QPR and... er... Crystal Palace boss may seem a tad underwhelming, but there's logic there.

Under Tony Pulis in the second half of last season, Palace benefited from being well-organised and adopting a more pragmatic approach to that favoured by Ian Holloway.

In theory, Warnock should be capable of carrying that particular baton - although he doesn't have much of a track record when it comes to the Premier League.

It's not just Palace's pointless start to the league season that Warnock will be looking to rectify. The Eagles haven't scored in their last seven meetings with the Magpies - the last Palace player to net against the Tynesiders was Lee Bradbury in a 2-1 FA Cup defeat at St James' Park in January 1999.

For their part, Alan Pardew's Magpies haven't started the new campaign like a runaway train either.

A home defeat to Manchester City was excusable, especially given the encouraging elements of their new-look team's performance, but they were relatively easily stifled by Aston Villa last time out.

There are always going to be teething problems when you add six new players to your squad over a summer, but this fixture will arguably be the first from which the fans will demand three points, particularly given the behind-the-scenes goings on at Palace this week.

Newcastle are without long-term absentees Davide Santon and Papiss Cisse (one knackered knee each), but midfield terrier Cheick Tiote may return after missing the Toon’s first two league matches.

Palace will hope to have Scott Dann back in defence after a thigh injury ruled him out of their defeat to West Ham. Joe Ledley, who missed last weekend’s match with a groin injury picked up in the warm-up, may also return. Striker Dwight Gayle hit a midweek League Cup hat-trick at Walsall and will hope to start, as will Wilfried Zaha who is back at the club on a season-long loan from Manchester United.

It’s early days, but the pick of the bunch of players plucked from the transfer tree by Pardew this summer has thus far been 24-year-old Cabella. The Frenchman, who signed from Montpellier last month, showed a few impressive flashes in both the Magpies' opening-day defeat to champions Man City and last weekend’s goalless draw with Aston Villa, although he has yet to really grab a game by the scruff of the neck.

At Villa Park, Cabella starting to make things happen, creating 4 goalscoring chances for his team-mates. What will please his manager even more is that he also tracked back to make a game-high 4 tackles.

Could Saturday be the day he makes a real difference?

It's safe to say Pardew and Warnock have 'previous'.

When Warnock was once asked if he had an issue with Pardew, he replied: "There might be something between us - he isn't very good at shaking hands."

Pardew later explained: "That goes back to when I was manager at Reading and we won up at Bramall Lane and I went on to the pitch to celebrate with the players. I never got round to shaking his hand so that is what he is referring to."

When Pardew's West Ham drew 1-1 with Warnock's Sheffield United in a 'tasty' FA Cup tie back in January 2005, the then-Hammers boss reacted angrily to Warnock's claim that a teenage Mark Noble was not getting 'good guidance' from his manager.

The blood presumably only got badder (that is a thing, we looked it up in a science book) when Pardew's Irons signed Carlos Tevez and Javier Mascherano in circumstances best described as 'iffy'.

Tevez was crucial in helping the east Londoners avoid relegation at Sheffield United's expense, and although Pardew was sacked in December 2006, long before an infamously bitter legal dispute between the two clubs came to a head, it's unlikely Warnock will look on the current Newcastle manager's involvement favourably.

It seems things may have mellowed slightly in recent times, as Warnock was staunch is his defence of Pardew following his 'headbutt' on Hull midfielder David Meyler last season. Nevertheless, it may be worth keeping an eye on the post-match formalities, just in case.