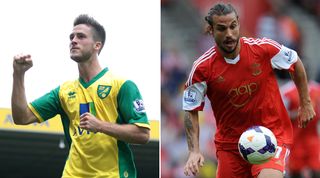 The battle of the lovable, ambitious, free-spending underdogs.

Pitting together two teams whose transfer activity suggests they’re serious about moving on up, as M People once sang, it’s the battle of the upwardly mobile at Carrow Road.

Outside big spenders Manchester City, Chelsea, Spurs and… Cardiff (move along Manchester United and Arsenal fans, nothing to see here) no teams have spent more than the Canaries and Saints in the Premier League this summer.

But with great expenditure comes great expectations - said nobody in Spiderman, ever – and that means both Mauricio Pochettino and Chris Hughton are expected to build on optimistic summers by producing results.

A solitary point from games against Everton and Hull gives Norwich some cause for concern, despite an encouraging 6-3 League Cup triumph over Bury in midweek.

Southampton meanwhile have looked extremely promising in fits and starts, excelling at times against West Brom before securing a 1-0 away win but labouring to a 1-1 draw at home to Sunderland. With plenty of interesting new signings bedding into both teams, an intriguing game awaits.

For Southampton, Luke Shaw and the highly influential Morgan Schneiderlin both missed out on League Cup duty in midweek due to injury. Both remain doubts and will face late fitness tests. After appearing from the bench against Sunderland, new £15m signing Pablo Osvaldo could make his full debut should Pochettino wish to re-jig his lineup.

Norwich are without Elliot Bennett and Gary Hooper is a doubt, but better news for the Canaries comes in the form of Anthony Pilkington and Sebastien Bassong coming through significant gametime in the cup in midweek. Both could feature here. After Johan Elmander bagged two goals against Bury, Hughton has a choice to make in attack between the Swede and Ricky van Wolfswinkel.

By calling up Ross Barkley and Andros Townsend Roy Hodgson has shown an arguably premature eagerness to promote young English talent this week. Such an approach will no doubt suit 19-year-old Redmond just fine, and if his early performances in the green and yellow of Norwich are anything to go by it might not be too long before he too is fast-tracked up to senior level.

Redmond has been a constant threat for the Canaries so far this season, successfully completing 10 of his 15 take-ons – the joint best dribbler in the Premier League to date alongside Newcastle’s Hatem Ben Arfa.

Whoever gets the nod at right back for Southampton this weekend out of Calum Chambers and Nathaniel Clyne faces a challenging afternoon.

The two managers have only met once before. It ended 0-0. Enough said.