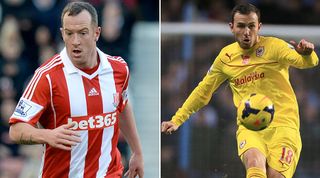 "Now don't switch off your TV and go to bed just yet, because coming up next on Match of the Day it's…"

Played 13, Won 3, Drawn 4, Lost 6. Both Stoke and Cardiff have identical records in the Premier League so far this season, meaning that the pair head into this midweek clash just above the relegation basement in 16th and 17th, standing over the stairs, peering down precariously with bemused, nervous looks on their faces.

Stoke, quite simply, are not Stoke anymore. That they are one of only three teams in the league not to score from a header this season is enough of a betrayal of principles to have any true Pulis-ciple headbutting the nearest man in a towel in sheer disgust. Mark Hughes' revolution means they've also mustered the joint-fewest headers on target in the top flight (4) and have conceded more headed goals than anyone else in the league, equal with Fulham and Newcastle (6). Truly, the death of a philosophy.

After battling bravely against Manchester United, Cardiff were pretty hopeless against Arsenal, failing to impose themselves in any way and almost sleepwalking to a 3-0 defeat in a game in which the priority seemed to be more making Aaron Ramsey feel welcome than battling for three points.

For long spells, Cardiff's problem was an inability to get the ball from Gary Medel, who dropped deep to collect play from the defenders, to the five men ahead of him who could create something. As such, a broken team failed to really threaten the league leaders, and reports suggest Malky Mackay may consequently use this midweek round to rotate his team and test some different options.

Cardiff have a clean bill of health, but summer signing Andreas Cornelius is still not quite 100% following a long spell on the sidelines with an ankle injury, and may continue to warm the bench.

This scribe has praised Stoke's midfield sentinel N'Zonzi once already in recent weeks, and even in a 4-0 thrashing at Everton last weekend N'Zonzi emerged with some minor crumb of credit, in completing more passes than every other player on the field bar Gareth Barry. Okay, it's not much, but it shows that even when things are going wrong the Frenchman doesn't hide and is keen to get involved.

Meanwhile, Whittingham adds a bit of craft to Cardiff's robust midfield. With three assists and 1.6 key passes per game (more than Aaron Ramsey), Whittingham is vital to Mackay's midfield. Receiving the ball from Medel, the former Aston Villa man looks to spread play with long diagonals to the flanks - he plays a significant amount of long balls, but not as many through balls; less than midfield partner Jordon Mutch, for example.

Whittingham is also Cardiff's set-piece taker, and with Stoke now seemingly terrible in the air (who'd have thought it?) his delivery could have a major impact on the game's outcome.

Both of these managers were linked to Stoke in the summer. Mackay was reportedly seen as the cheaper option by the Potters' board, but in the end they went Waitrose not Tescos and appointed Hughes. The duo have never faced off in the Premier League.

Stoke have won just one of their last 10 Premier League games, but injuries to key players could see them struggle here. 1-1.