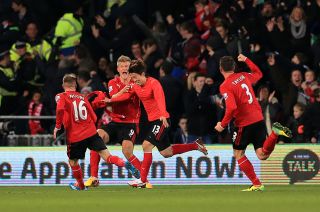 Absolutely battered at the Etihad, Tottenham's mean defence couldn't bail the team's attack out this week as Manchester City continued their devastating home form by winning 6-0. Spurs are in the league's bottom five for goals scored this season with only nine mustered from 12 games.

Focus will therefore inevitably turn to Roberto Soldado, who cost £26million from Valencia but has managed one less goal than fellow countryman Alvaro Negredo despite starting three games more and with the benefit of three penalties scored.

Soldado had a stinker at the Etihad, in stark contrast to the former Sevilla man at the opposite end of the field. While Negredo scored one brilliant goal and directly contributed to another, which eventually went in as a Sandro own goal, Soldado had to feed off scraps and only managed one shot off target, before he was hauled off.

Spurs have often struggled to get the ball to their chief marksman this season - and in that sense Soldado can't take all the blame for a slow start. That said, at the moment the 28-year-old doesn't look like he suits Spurs' style of play at all - he doesn't make the kind of runs necessary and isn't a target man who can hold the ball up and bully defenders. That will worry Andre Villas-Boas.

Big clubs could soon start to sniff around N'Zonzi

With a goal and an assist on the way to Stoke's 2-0 win against 10-man Sunderland, Steven N'Zonzi once again proved his worth to Mark Hughes' slowly redeveloping side. While the post-Pulis reformation taking place at the Britannia Stadium owes no small debt to some of Hughes' new recruits - Erik Pieters and Marko Arnautovic have both already shown themselves to be worthy captures - N'Zonzi is the player you watch time and again and can't help but think he could do a job at a club with far loftier ambitions, with the greatest respect to Stoke.

A midfielder with character, bite and silky technique, N'Zonzi has that virtue present in all great midfielders in that he wants to be involved and is keen to stamp his own personality on games. In the 3-2 defeat to Manchester United at Old Trafford N'Zonzi was one of Stoke's best players and arguably the game's best midfielder, performing his defensive duties and also looking to push forward, take people on and build play where possible.

Against Sunderland the Frenchman had a major say on the game's outcome, and although his final third passing can still improve, it would be no surprise if N'Zonzi is a player a few teams are looking at in the January sales.

Would Gary Medel walk into Manchester United's midfield? Possibly. Would Peter Whittingham? Okay, perhaps not, but it says something about the champions' ongoing problems in the middle of the park that not only were they outpassed by a newly-promoted team, but that there were genuine questions as to whether one of Malky Mackay's signings might have been a more suitable fit at Old Trafford.

Chilean international Medel cost around £16.5million less than Moyes' own marquee midfielder Marouane Fellaini, but you probably wouldn't have guessed it given the pair's respective performances. Fellaini has made a difficult start to life in red, something his manager admitted to in the buildup to the 2-2 draw in Wales, and while his performance was by no means his worst since leaving Everton, neither he nor Tom Cleverley took control of the game in the absence of the injured Michael Carrick.

Both Medel - who impressed at Wembley as Chile beat England 2-0 - and Whittingham completed more passes on the day as United struggled to get a grip in the game's engine room, leaving Moyes to lament two more points dropped in the title race.

Since his appointment, Moyes has consistently said he needs time to get to know his players. Unfortunately for him, the player he knows best is starting to become one of his biggest concerns.

When Samir Nasri jumped out of the way of Robin Van Persie's match-winning free kick in a 3-2 for Manchester United at the Etihad last season, the French midfielder came in for huge criticism from Sky Sports pundit Gary Neville. "He goes missing" Neville puffed in an attack that pulled no punches, and many of a sky-blue disposition agreed with him. At one point, it seemed as though Nasri's days at City were numbered.

Under Manuel Pellegrini, however, Nasri has quietly shown the form that made him the subject of such a high profile hijacking from Arsenal back in 2011. In City's 6-0 win over Spurs, which Nasri may have enjoyed with extra relish, being a former Gunner, Nasri continued his trend this season of silently and efficiently performing well, knitting together play down the left and making more ball recoveries than any other player on the field bar Sandro.

Nasri is in the Premier League's top ten for key passes per game this season with 2.3, and has completed 90.5% of his passes in a campaign that has seen him remind people of his qualities. He still has a tendency to drift out of games every now and then, but while Aguero, Negredo, Toure and Co. pick up the plaudits, Nasri too deserves praise.