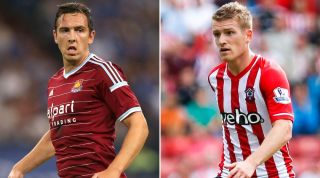 The difference between a poor start and an OK one.

It's been a funny beginning to the campaign for both West Ham and Southampton. Here are two teams with their sights set on stability and maybe a good cup run - something, anything to cheer their currently gloomy supporters. Problem is, both teams are a hair's breadth away from developing a losing habit.

Sam Allardyce's men experienced the worst of home starts. Sucker-punched by Spurs in the closing minutes of their season opener - a team they overturned three times last year - after playing a chunk of the game with an extra man, they even contrived to miss a penalty. This is a fixture their fans have salivated over more than any other. The defeat will have felt as heavy as the League Cup exit that followed a week later against Sheffield United.

They reversed their fortunes with a 3-1 win against rudderless Crystal Palace, but the Hammers' problems are clear for anyone to see. Without a top class striker they lack the teeth to dismantle a team with a smattering of defensive savvy.

Before the season, Saints looked like a team on the slide. With their manager poached by Spurs and several key members of their starting XI sold across the Premier League, the side that had looked, in spells, like one of the more entertaining units in the country seemed destined for a miserable 2014/15.

However, under Ronald Koeman, Southampton seem to have found some fighting spirit.

Against Liverpool at Anfield they dominated possession in a 2-1 defeat that flattered the hosts. And while a 0-0 home draw with West Brom and a 2-0 away win against Millwall in the League Cup is hardly cause for jubilant celebrations, in a period of heavy bleeding, some bandaging has at least been applied.

Allardyce has no new injury concerns, but his new signings such as Diafra Sakho will have to settle in quickly if they're to dismantle Southampton here. Teddy Sheringham has been brought in as attacking coach to install some much-needed guile in the strikeforce.

In a game without too much of an attacking threat on either side, this fixture could be decided in midfield. How creative either team will be depends heavily on the input from wantaway Schneiderlin and the thrusting effervescence of Noble. While not being the most skilful of players, Noble does at least have energy to burn. He will have to be at his enthusiastic best to impose himself against a holding midfielder with the strength and guile to destabilise top class creatives.

Koeman is keen to improve on his group of players as the transfer window comes to a close. Southampton have been strongly linked with Spurs winger Andros Townsend and Atletico Madrid defender Toby Alderweireld.

"I don't go and talk about names, about players," he said. "In two positions we are trying to bring in two new players and we hope to bring them in this week."

Allardyce, meanwhile, feels like a man perennially under pressure.

West Ham's fans are hardly enamoured by him; excuses seem to accompany every fixture, most notably after the penalty shootout defeat to Sheffield United. "Their goalkeeper was inspired," he said.