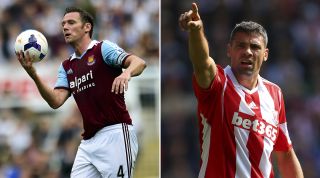 The Premier League’s first hoof-athon of the season where the ball could, for the first time ever, spend more time in the air than on the deck.

If ever a match was destined for the graveyard slot on Match of the Day, this is it. The big one. Here, a couple of teams who aren’t adverse to a bit of robust football go head-to-head, so there'll be a fair bit of rough and tumble at Upton Park.

That said, fans of both clubs would cry foul about the 'long ball' tag which has been so permanently stitched into the vernacular around Stoke and West Ham.

Sure, both teams prefer to play with a big man up top, but that conveniently ignores the work of wingmen like Matt Jarvis and Matthew Etherington, midfield creativity of Joe Cole and Charlie Adam, and strikers with genuine ability in Peter Crouch and Andy Carroll.

During Stoke’s win against Crystal Palace last weekend the Potters only made 36 long passes (out of 409 attempted during the match), going some way to support Mark Hughes’ claims of altering the team’s approach in possession and encouraging a more entertaining game.

West Ham, meanwhile, have opened the season in assured fashion. Alan Pardew was quick to use his post-match press conference last weekend to remind everyone about the Hammers’ love of the long ball after a dour 0-0 at St James’ Park. That's the same long ball that almost undid Newcastle not once but twice from free-kicks. If the tactic fits, Alan, then quite frankly, Sam’s going to wear it.

Stoke’s loan signing from Liverpool, Morocco international winger Oussama Assaidi, could make his league debut for the club, while Wilson Palacios could enjoy a welcome return to the Potters’ midfield. The fit-again Honduran is a potential boon for the new gaffer’s aspirations to turn Stoke into a team of silksters.

Allardyce, meanwhile, may have had his head turned in midweek when it comes to attacking options, as Ravel Morrison put in a solid League Cup display against Cheltenham Town. Carroll remains sidelined, and he’s no doubt watched Rickie Lambert’s seamless transition into the England set-up with interest.

Far from big lads kicking lumps out of each other down the middle of the park, this game will be won and lost by those fancy Dans on the wings. Whoever capitalises on the service out wide will edge the game. For Stoke it’ll be down to Etherington and Jon Walters, while Jarvis and Stewart Downing will be ploughing the furrow in the other direction.

This comparison of Walters' and Jarvis’s performances in their last outings show how the Stoke man has quite a free and roving role in the attacking third – something West Ham will need to be conscious of, so as not be pulled out of position. Jarvis, on the other hand, hugs that touchline like a much-loved teddy. The oppo won't feel like giving him a cuddle if he continues his early-season crossing form, though.

Both men can count Blackburn Rovers an alma mater… and they’re lucky stars that they no longer call Ewood Park home. Dodged a bullet there, didn’t you gaffers?!

Hughes definitely has the tougher job this season, with the Stoke faithful requiring some convincing over his appointment. Allardyce continues on the even keel he set last season. The grudging respect is growing among West Ham fans, particularly while the Irons’ miserly defence continues its Scrooge-like generosity. By the way, Big Sam’s win percentage since arriving at West Ham is his best with any club: 43.75%.