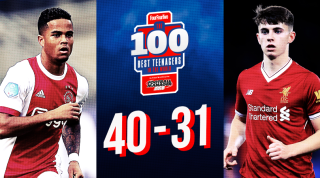 Need to know: Ashley Cole 2.0? An English David Alaba? The who’s who of superpowers linked to Sessegnon – including Bayern Munich, Manchester City, Manchester United and many more – suggest those lofty juxtapositions may not be hyperbole.

The left-back made his Fulham debut just 81 days past his 16th birthday, since when he’s racked up 48 first-team appearances for the Cottagers. And he only turned 17 in May.

Sessegnon’s attacking class may ultimately dictate that he plays in a more advanced position permanently, as was the case with fellow left-footer Gareth Bale.

Highlight so far: Being integral in England’s 2017 European U19 Championship conquest, posting a brace in a 4-1 thrashing of Germany and finishing as the tournament’s joint-leading marksman. MW

Need to know: Tim Wiese, whose career began in Cologne, quit football to join the WWE. Ozcan went in the opposite direction, quitting wrestling to concentrate on a career with Cologne.

The attacking midfielder has settled seamlessly into the first team and recently won the Fritz Walter Medal – an award previously bestowed upon Toni Kroos, Mario Gotze and Timo Werner – for being the best German U19 footballer.

Ozcan has represented Germany at every level from U15 to U19, but is still eligible to play for the senior Turkey side.

Highlight so far: Just 60 seconds into his Bundesliga debut in September 2016, Ozcan befuddled two Schalke players, leaving Naldo on his backside to present Simon Zoller with a tap-in. MW

Need to know: He may look like his old man. He may have been showered with hype in his mid-teens and become one of Ajax’s youngest debutants. But that’s about where the similarities end between Justin Kluivert and his father.

While Patrick was a hulking striker renowned for his aerial ability and poise in front of goal, his 18-year-old son is a diminutive winger exalted for his speed and sorcery.

Highlight so far: The Holland U21 international wowed the Ajax Arena against Go Ahead Eagles in May, pulling off one of his patented sombreros and thumping home the opener from distance. MW

Need to know: Garcia has already been tipped for greatness by Marco van Basten, and broken a couple of Dwight Yorke records. The Trinidadian packs sprinter’s pace, hypnotic trickery and, unlike several wingers, is hard to knock off the ball. He can’t half whack a ball, too, according to Van Basten – an apt judge of a venomous shot.

Garcia has made a flying start to life with AZ in the Eredivisie, having initially joined them upon his 18th birthday in 2015, and also in the red of Trinidad’s Soca Warriors.

Highlight so far: Sixteen minutes into his international debut, away to St. Vincent and the Grenadines, the 18-year-old substitute had bagged a brilliant brace to snare Trinidad and Tobago a much-needed 3-2 win in Russia 2018 qualifying. MW

Need to know: Jurgen Grabowski, Andreas Moller, Jay-Jay Okocha. They certainly love their entertainers in Frankfurt, and with Barkok the Eagles have another on their hands.

The 19-year-old has some of the fastest feet in football, studies clips of Zinedine Zidane, and isn’t shy to go for a killer pass or speculative shot.

“He is a dream footballer,” said Eintracht coach Niko Kovac of the attacking midfielder, who Arsenal have reportedly courted. Barkok, of Moroccan descent, has represented Germany at multiple youth levels and made 18 Bundesliga appearances last season.

Highlight so far: Rose from the bench to bag a smashing last-gasp winner on his Bundesliga debut against Werder Bremen last season. MW

Despite being only 18, Romero can hold his own physically and score with both feet. He bagged braces in Velez’s first two 2017/18 Primera Division matches, immediately vanquishing fans’ concerns about the departure of principal goalscorer Mariano Pavone.

Highlight so far: El Tigre undid Tigre in the opening round of Primera Division action in August, with a stretching volley and violent rocket spurring Velez to a 3-0 away win. MW

The teenager played right-back that day, but excelled in central midfield at the end of 2016/17 and was invariably a ball-playing centre-back for United’s youth sides.

Born in Congo but raised in Rochdale, Tuanzebe joined United’s ranks as an eight-year-old, gave his first television interview aged 11, and in 2015 became the maiden first-year scholar to captain their U18 side since Gary Neville in 1991.

Highlight so far: Tuanzebe’s top-flight bow may have ended in a 2-0 defeat at the Emirates, but his display made him the talk of Twitter and Sanchez the subject of some unflattering hashtags. MW

Need to know: Woodburn has been likened to former Liverpool strikers Robbie Fowler and Michael Owen since making his professional debut last year, but it’s still not clear whether he’ll go on to play through the middle – the Welshman has spent much of his early career operating from the left.

Regardless of his future position, Woodburn is a wonderfully gifted youngster who packs a range of exciting attributes including speed, intelligent movement and clinical finishing.

He became Liverpool’s youngest ever scorer when he netted at the age of 17 years and 45 days against Leeds last season.

Highlight so far: How about bagging a second-half winner from 25 yards on your full Wales debut? Woodburn made the perfect impact against Austria to keep the Dragons’ hopes of qualifying for the 2018 World Cup alive. Alas, however, the youngster will have to wait for a taste of tournament action. GL

Need to know: Genk have helped develop some brilliant players in recent years, with Kevin De Bruyne, Kalidou Koulibaly and Thibaut Courtois all among the Belgian outfit’s successful alumni.

Berge will hope to be regarded in the same light as those stars one day, having hit the ground running following his transfer from Valerenga in January.

A 6ft 5in holding midfielder, Berge relies on his technical ability more than his physical gifts and excels at starting attacks from deep.

Highlight so far: Berge made six appearances in the Europa League last season as Genk reached the quarter-finals via triumphs over Athletic Bilbao, Astra Giurgiu and Gent. GL

Need to know: Vital has already experienced more ups and downs than his division-yo-yoing club. As a five-year-old he joined Vasco da Gama; aged nine he witnessed his mother being fatally shot.

Football was always his escape, and the playmaker thrived for Brazil’s U15s before being promoted to his club’s first team.

Vasco were relegated into Serie B, with Mateus demoted back to the youth team – but after inheriting their No.10 shirt in July, things have been looking up for the wispy right-footer.

Highlight so far: Belatedly broke his Vasco duck – two years after his debut – with the winner against Gremio in September. MW