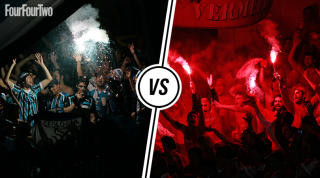 Down in the southernmost state of Brazil, the Gaucho-country Rio Grande do Sul, you’ve got a choice: you’re either Gremio or Internacional.

The two sides share the state capital Porto Alegre and command roughly equal slices of its metropolitan area’s 4.5m inhabitants, having carved up the Campeonato Gaucho state championship in similar style: of its 97 titles, they’ve won 81 (Inter shading Gremio 44 to 37).

Gremio are the older club, founded in 1903 by one of those rich enthusiasts who helped popularise the game we all love. (Thanks, rich enthusiasts!) But it was a private members’ club for those of German ancestry, which six years later irked the Italian-descended brothers Henrique, Jose and Luis Poppe into forming Internacional, the name a pointed snook cocked at the city rivals.

Such righteous indignation and all-encompassing internationalism didn’t help Inter in the first “Grenal” derby, in July 1909: the older club ambled to a 10-0 triumph so comprehensive that some reports have the Gremio goalkeeper walking off the pitch for a chat with supporters.

Things quickly got closer. For much of the century-long rivalry the sides have been evenly-matched, adding a genuinely competitive edge, and not just at the regional level: they’ve won two Copa Libertadores each, Inter have three Brazilian titles to Gremio’s two, and the younger club are also slightly up on the head-to-head.

Inter have gathered some fine nicknames along the way. Already known by the excitingly cowboyish Colorados because they play in red, a particularly impressive 1940s saw them christened Rolo Compressor – The Steamroller. Other sobriquets included Celeiro de Ases (Factory of Aces) and Campeão de Tudo (Champion of it All), which makes up what it lacks in humility with inclusion. And inclusion was the key to that great 1940s team, which included all ethnicities at a time when this was far from a uniform policy in Brazilian football.

By their 50th anniversaries, the teams were attracting the sort of loyal followings that make a club have to seek pastures new. In 1954 Gremio moved from the 15,000-capacity Baixada to the 45,000 Monumental (where they stayed until moving to the spanking-new 55,000-seat Arena de Gremio in 2012).

Inter also outgrew their 20,000-capacity Estadio dos Eucaliptos but the replacement Beira-Rio took more than a decade to get built, not helped by a dip in on-pitch fortunes and the usual Brazilian flair for local government efficiency. It finally opened in 1969, and was substantially remodelled to a 50,000-seater for Brazil 2014 – having been preferred to Gremio’s stadium, to the delight of Inter fans.

And those stadiums aren’t the soulless identikit affairs you see in some cities. You’ll get enormous banner displays, flares and smoke bombs setting off the colourful clash of Inter’s red against Gremio’s light blue, black and white tricolor, while your ears are soothed or assaulted by the musical locals and their endless singing.

Indeed, while Inter’s paying membership is in six figures (the highest in South America), Gremio fans have a well-earned reputation for being among the most fanatical in Brazil, which is quite some accolade when you think about it. The new stadium has a designated standing area behind the goal, where their hardcore support developed a signature move called ‘the avalanche’: celebrating a goal by legging it down the terrace toward the pitch to celebrate with the players. Unfortunately, The Man deemed the move too dangerous and metal crush barriers were soon installed. Boooo!

Men of the match

In any derby, heroes will arise. Gremio’s include the buck-toothed 18-year-old, name of Ronaldinho, whose stunning display in the 1999 state final included the match-winning goal (after a nutmeg and a one-two) and even a flick over the head of his alleged man-marker: the World Cup-lifting captain Dunga.

Then there’s Eurico Lara. Despite a heart condition, the legendary Gremio keeper was determined to play in a 1935 Grenal; upon conceding a penalty, he was reminded by the taker – who happened to be his brother – that his doctor had told him to take it easy. Ignoring the fraternal advice, he saved the spot-kick but had to be subbed and died within two months. He’s celebrated in Gremio’s anthem.

As for Inter, they love to recall 1989’s ‘Grenal of the Century’: after a goalless first leg, the second part of the Brazilian Championship semi-final – and with a Copa Libertadores place also at stake, it was winner-takes-all in front of almost 80,000 fans. Trailing 1-0 at half-time and down to 10 men in 40-degree heat, Inter stormed back to win 2-1 with two goals from the injured Nilson.

Such things create legends. As FFT’s Brazilian correspondent Mauricio Savarese notes: “In the week before the derby, nothing else matters in the Southern state of Rio Grande do Sul, where being neutral is impossible. When Inter dominated Brazilian football in the ‘70s, Gremio struggled. In the ‘80s, it was the other way round. It’s been a see-saw ever since, but come matchday, these two giants of Brazilian football are, and will always be equal.”

FourFourTwo's 50 Biggest Derbies in the World