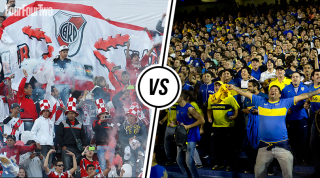 Football lends itself well to class warfare. Codified at public schools but beloved of the working class, it was exported around the world by a combination of the adventurous officer class and the workers who built empires, military or commercial. And it’s at the heart of the world’s best derby.

Boca-River is not the only rivalry on our list to be sparked by status anxiety and snobbery – leaf through the other 49 and you’ll find plenty of examples of hoi polloi vs bourgeoisie. But it’s the brightest, brashest and most brilliant example of its kind.

Both came from the docks. Club Atletico River Plate were formed in the working-class Buenos Aires dockland neighbourhood of La Boca – oh, yes – in 1901; Club Atletico Boca Juniors popped up nearby four years later, formed by Italian immigrants but taking the idea of their blue-and-yellow livery from a Swedish ship which just happened to float by. The first derby took place in 1908.

Then River moved up in the world, relocating to the affluent northern suburb of Nunez in the mid-’20s. And with the advent of professionalism in 1931, they started throwing money around, buying winger Carlos Peucelle for $10,000, then forward Bernabe Ferreyra for a jaw-dropping $35,000.

That early expenditure earned them the nickname Los Millonarios. It’s stuck ever since, and the class divide has come to define the rivalry. The general perception is that Boca are rugged, while River having a reputation for flair.

And of course, both sets of fans have embraced the idea with all the enthusiasm of primary school children. Boca call River gallinas (chickens) because they’re gutless, having choked by blowing a two-goal lead against Penarol in the 1966 Copa Libertadores Final. River call Boca smelly – chanchitos (little pigs) and bosteros (let’s say “manure collectors”).

The fans have embraced the insults, and so have the players. Boca legend Juan Roman Riquelme – who once said, “When I wake up, I can’t put on anything red or white” because they’re River’s colours – has happily posed for photos holding signs saying Bosteros.

Carlos Tevez, who returned to his first club Boca in 2015, once celebrated a derby goal by doing the chicken dance. He got a red card for inciting a riot – but then, so did River player Matias Almeyda in 2011 after kissing his badge in front of Boca fans.

The fans have also enjoyed pranking each other. At the turn of the century, Boca fans plastered Buenos Aires in posters listing the musical acts who’d played at River’s El Monumental stadium, noting that while their rivals were watching music Boca were winning trophies. Not ones to miss a trick, River nicked an idea from Pink Floyd and floated a large inflatable pig – wearing a Boca jersey, of course.

Sometimes it has gone much further. Take the build-up to 2018's Copa Libertadores final, for example – the first time that these two clubs had ever met in South America's showpiece event – when an argument between a Boca and River fan got so heated that one burned down the house of the other.

El Monumental is a fabled old stadium, venue for nine games at the 1978 World Cup (including the final) and the spiritual home of the massively over-the-top ticker-tape entrance. Boca’s La Bombonera is bonkers brilliant, a distinctive D-shaped blue-and-yellow affair which literally bounces under the joyous jumping of fans from toddlers to grandmothers.

And what sights those stadiums have enjoyed. Pretty much any world-class Argentine player you can name has played for one side or the other, with plenty of the rest of South America’s talent passing through the portals too.

By the time River splashed the cash that gave them their nickname, Boca had already piled up half-a-dozen league titles, and between them the sides have dominated the trophies ever since. River have won the league 36 times, Boca 33; that’s well clear of nearest challengers Racing on 17.

If that threatens to bolster River’s superiority complex, Boca have a trump card: they’ve won the Copa Libertadores six times to their rivals’ three. It’s all very Liverpool vs Manchester United, except Boca have won four of their continental trophies this century, three of them under Larry David lookalike Carlos Bianchi. And just in case they were enjoying that advantage too much, River won the 2015 Copa Lib to cut the lead and keep them on their toes.

Boca also edge the head-to-head record, but River’s relegation in 2011 (they bounced straight back) and a generally more open title race have done little to decrease the determination. It has been described as making the Old Firm game “look like a primary school kickabout”.

Or as Martin Mazur of El Grafico magazine puts it: “A hundred years ago it was about working class vs aristocracy. Today it’s just about hate. The on-pitch atmosphere reflects the 2,000 policemen that patrol the stadium: bust-ups, red cards (two per game is common) and controversy are part of the derby. Attending a Boca-River game, especially at La Bombonera, is a once-in-a-lifetime experience. In the stands you can expect anything – from chicken feathers to flying pigs.”

Long may this class war play out for the world's entertainment.

READ THIS: More Than A Game: Boca Juniors vs River Plate

#FFTderbies The 50 Biggest Derbies in the World: list and features here