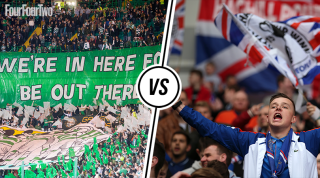 “I’ve been fortunate to see derby games all over the world and there is nothing that comes close,” the late Rangers great Sandy Jardine once told FFT. “When you go out of the tunnel you just get hit by this level of noise.”

“Afterwards in the dressing room your ears are still ringing,” said former Celtic defender Tom Boyd. “Even when you go back on the coach they’re still buzzing. The difficult thing with that kind of noise is trying to communicate, to organise a defence. In the cauldron it can become almost impossible – it usually involves just shouting as loud as you can. Your throat is raw after one of those games.”

It is a rivalry that has undoubtedly been stoked by sectarianism, but the Old Firm actually got off on a fairly friendly footing. Rangers had recently moved to their new permanent home on the south side of Glasgow when Celtic were founded in 1888, with the intention of raising money from matches to distribute to the poor and disadvantaged of the east end.

The two clubs met for the first time later that year, with Celtic winning 5-2. The game attracted an almost unprecedented crowd of 2,000 spectators. Eleven years later, Rangers agreed to provide the opposition as Sandy McMahon became one of the first Celtic players to receive a benefit match.

Any rivalry was confined to the pitch until the 1920s and 1930s when social, religious and political tension – as well as the rise of Glasgow’s street gangs – began to impact on football. Soon the city’s chief constable Percy Sillitoe was threatening to ban the Old Firm fixture altogether in an attempt to reduce the crime rate.

The city’s Catholic population, largely Irish and disadvantaged, had started to become victims of discrimination. Meanwhile, new laws allowing Catholic schools to be funded and run by local authorities created ill-feeling among the Protestant establishment. As Celtic grew ever closer to their Catholic origins, Rangers became more entrenched in Presbyterianism.

Tensions remain between Celtic and Rangers fans to this day. Although the introduction of legislation banning bottles, cans and alcohol in Scottish grounds helped to quell violence, the stigma of sectarianism is not so easily washed away.

On one side, thousands have been known to sing The Sash and other Loyalist anthems. On the other, many have sung The Boys Of The Old Brigade and eulogies to Irish Republicans. Even the most innocuous of songs can be turned into a torrent of abuse by an Old Firm crowd. Rangers once ditched their entrance anthem Simply The Best because their fans had corrupted the lyrics with references to the Pope and the IRA.

But a long-held Ibrox policy, never publicly stated but an open secret in Scottish football, is gone these days. For many years, Rangers would not sign a Catholic. Celtic had no such qualms – indeed Jock Stein, the club’s most successful manager, was a Protestant.

Things changed at Ibrox during Graeme Souness’s tenure as boss, when he signed players solely on talent rather than religious affiliations. The highest-profile Catholic arrival was former Celtic striker Mo Johnston.

It wasn’t well received by many on both sides – Celtic fans called him Judas, while some Rangers fans burned scarves and threatened to hand in season tickets. Even the club’s own kit man protested by refusing to deliver Johnston’s kit to his hotel room during a pre-season tour, despite doing so for every other player. Johnston, though, would soon get Rangers fans on his side with a winner against Celtic in an Old Firm clash.

Two teams and a title

That the two clubs have dominated the league – save for Rangers’ recent foray into the lower leagues – has also helped to intensify the rivalry. League matches have often been both derbies and potential title deciders.

READ THIS: More Than A Game: Celtic vs Rangers

“I was in the Rangers team that lost on the last day of the season in 1979,” Gordon Smith told FFT. “We only needed a draw to win the league and they won the title that day. To lose it at Celtic Park, to sit in the dressing room and hear their celebrations, was the worst feeling.”

Later Celtic would go seven years without victory at Ibrox. During that period, manager Tommy Burns suggested his gravestone would be engraved with the words ‘Andy Goram broke my heart’, in reference to the Rangers goalkeeper’s constant heroics in Old Firm matches.

Rangers may be playing catch-up these days after theirr enforced exile in Scottish football's doldrums, but the Old Firm derby remains as important as ever.

#FFTderbies The 50 Biggest Derbies in the World: list and features here